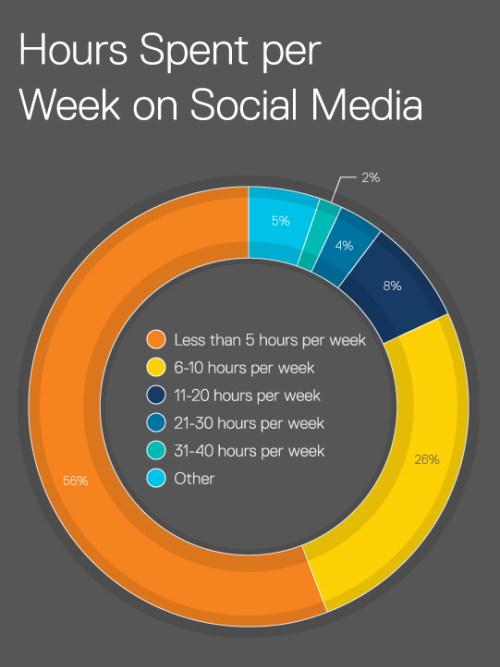 WebJunction and TechSoup for Libraries collaborated on a series of free webinars focused on Libraries and Social Media. In conjunction with the 2017 series, we invited participation in a survey to learn more about how libraries use social media. The survey was open throughout the 3-month series and 486 responses were submitted, providing valuable information about libraries and their use of social media.

The survey helps us understand:

TechSoup created an infographic to summarize the results of the survey, and we'd like to share some of the details shared by survey respondents.

The majority of respondents were staff at public libraries (72%), but we heard from staff at academic (10%) and school (3%), as well as others from consortia, state, special or other libraries.

Libraries use Facebook more than any other social platform, with only 5% of respondents indicating their library does not have a presence on Facebook. Twitter is the next most popular platform, used by 67% of libraries, followed by Instagram, used by 56% of libraries. And while libraries don't post as frequently to Pinterest, over 42% reported having a presence there. YouTube is used by just over 40% of libraries, with most posting there just once or twice per year. A number of comments indicated that libraries have experimented with other platforms, including Goodreads, Tumblr, LinkedIn and Snapchat, but many respondents said they stopped due to failed experiments and low engagement. A few libraries are using Meetup to promote events and there were two mentions of libraries posting podcasts to SoundCloud and iTunes.

Followers or "likes" on library social media platforms fall mostly under 5,000, with a majority indicating there are fewer than 1,000 "likes" or followers on their accounts, which aligns with the fact that most respondents serve smaller communities.

When asked "who posts to or manages social media for the library," 71% of respondents indicated that social media is managed by staff who do this work in addition to their other duties in the library. And 33% responded that their staff member's primary focus is on social media management. Volunteers are counted among 3% as those that post to their library's social media. Within this question, respondents could also indicate if the management of social media is distributed, with multiple staff trained to contribute with some autonomy (27%) or centralized, with a marketing department managing posting across a system (9%). Many commented with details indicating a blend of the two, e.g. "We have district-wide social media accounts. All of our community libraries have Facebook; six of them use Twitter. Our teen staff maintain social media accounts and a blog."

Libraries are using social media in various ways, as indicated by the responses seen in the image below. The top uses include sharing information about upcoming events, photos from events, and highlighting library services and resources. Many encourage comments from followers and share posts from others about libraries or books, or feature other community events or local news.

In the survey, and in the final session of the webinar, we asked libraries to indicate features or approaches they don't use as much, but would like to explore. Those responses included: 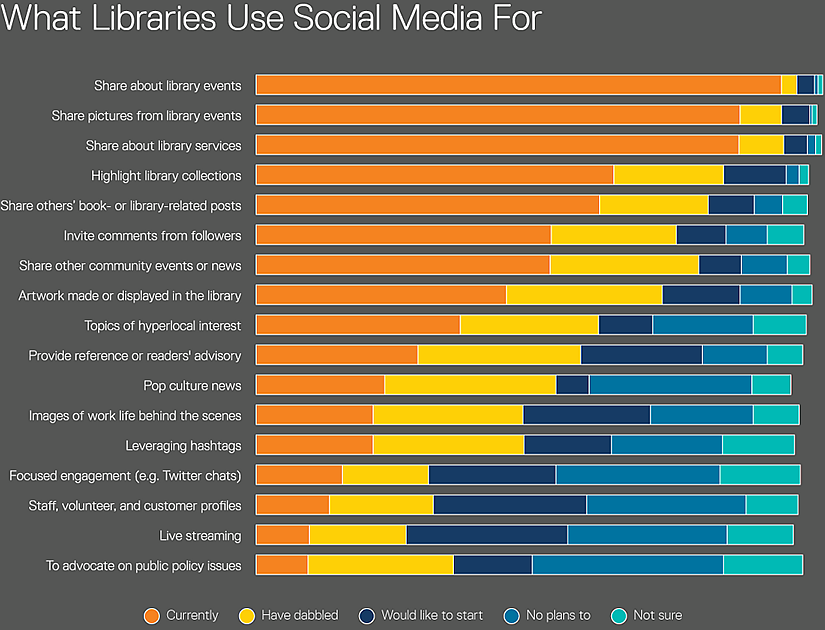 When asked about the biggest challenges to managing their library's social media presence, the top three responses were, "growing the audience or followers," "issues around staffing and time in administering the platforms," and "measuring the effectiveness, including using analytics." Related to staffing, one respondent noted a specific challenge is "Training staff new to doing social media for libraries. Not everyone can do it - it's definitely a skill!" One respondent indicated a blend of issues by stating, "…we don't want to just grow audience, we want to increase user engagement which is a measure of effectiveness."

TechSoup helps break down the top three challenges and offers solutions to make social media efforts more fruitful in their article, The 3 Most Common Social Media Challenges for Libraries and How to Overcome Them. 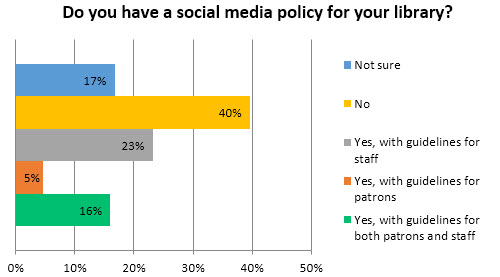 In preparing for the webinar series, we were interested in understanding more about the areas of interest on the topic. As we moved through the series, the outstanding presenters addressed many of these areas. We encourage you to explore all three sessions and the wealth of resources shared during each event, and encourage you to use the series learner guide to extend your learning with activities, questions for discussion, and ideas to implement, whether on your own, or with your team.