For many Americans, “rural is an abstract concept of rolling hills and farmland rather than a concrete definition. Thus, it can be a difficult task trying to define the term ‘rural’ and an even harder task trying to explain it." Nonetheless, in 2017, a reported 60 million Americans, or one in five people, lived in rural regions. (See How Does the U.S. Census Bureau Define "Rural?")

The economies of many parts of rural America are changing dramatically. According to Daily Yonder, “From 2010-16 nonmetropolitan America lost population. But counties that have recreation economies (hiking, whitewater, climbing, four-wheeling, etc.) grew slightly over the same period.” In other words, the parts of rural America doing the “best,” in terms of population stability or growth, are communities that have embraced outdoor tourism and recreation.

We all know that libraries have the opportunity to provide solutions to many problems rural areas face while bringing innovative and sustainable change to rural economies. What types of solutions can small and rural libraries bring to economies shifting to outdoor tourism and recreation? In this two-part series, we try to provide some preliminary answers by considering the case of the Cape May County Public Library System, located in the far south-eastern corner of New Jersey.

Part 2: Getting to Know Community Needs in Rural Tourism Towns

The staff of the Cape May County Library (CMCL) strive to serve everyone who finds themselves in Cape May County. Like many small and rural communities, outdoor recreation and tourism energizes the local economy. As such, the library seeks to balance the needs of both temporary and permanent residents. To learn more about community needs, in Fall 2019 the library circulated two surveys, one directed to general community members and the second focused on business owners and community leaders. The surveys showed that both groups were aware that tourists and visitors of Cape May County were eligible to get a library card and did not feel as though fines influenced their decision to use the library. 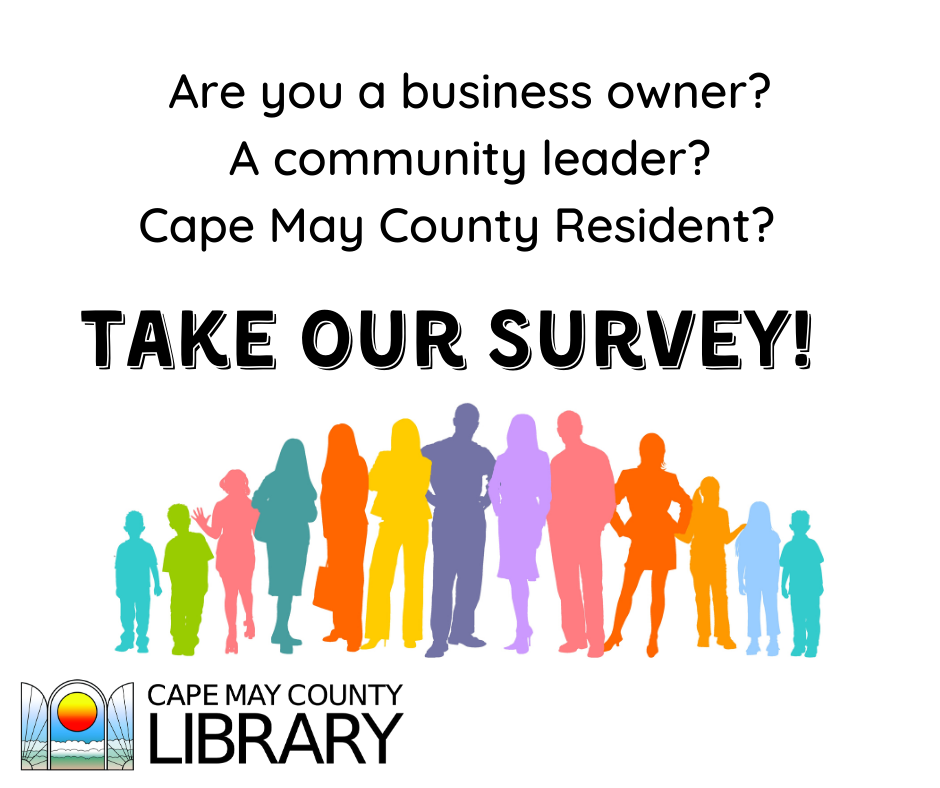 In addition to having paper copies of the surveys available at every branch, the library also sought the perspectives of those who don’t typically step foot in the library. CMCL Outreach Librarian Kara Brehm and Public Relations Head Audrey Dingler attended community outreach events with a wifi-connected tablet to collect survey responses. The bookmobile also presented an opportunity to engage pedestrians in responding. Audrey would tell them about the survey, and the respondent received a free Cape May County Library cup as a “thank you” for completing a survey. In addition to in-person solicitation, she spread the word on social media, on the CMCL website, and sent direct emails to local businesses that the library has partnered with over the years. The Cape May County Chamber of Commerce included a link to the community leader survey in an email blast to local business owners. The CMCL Adult Programming Department also included a link to the community members survey in their weekly newsletter. Within two months, the library collected just over 300 surveys with roughly 20% of respondents completing the community leader survey while the remaining 80% completed the general community member survey.

Challenges revealed by the survey

Before discussing some of the challenges revealed by the survey, it is important to note that survey respondents overwhelmingly supported the library, with nearly all encouraging staff to keep up the good work. Nonetheless two major challenges revealed by the survey were: 1) equitable services for all parts of the county and 2) the trend of voting rights amongst non-permanent property owners.

Meeting the Needs of Permanent Residents

One of the biggest issues the Cape May County Library has grappled with in recent years concerns providing equitable library services across the county. The libraries closest to the coast thrive more than the inland parts of the county during the tourist season. Respondents repeatedly noted issues of equity for the less economically robust portions of the county with more rapidly declining populations. The inland areas are also experiencing a more rapidly declining population. Several respondents made a point of saying they wished adult programs would return to the Upper Township branch. 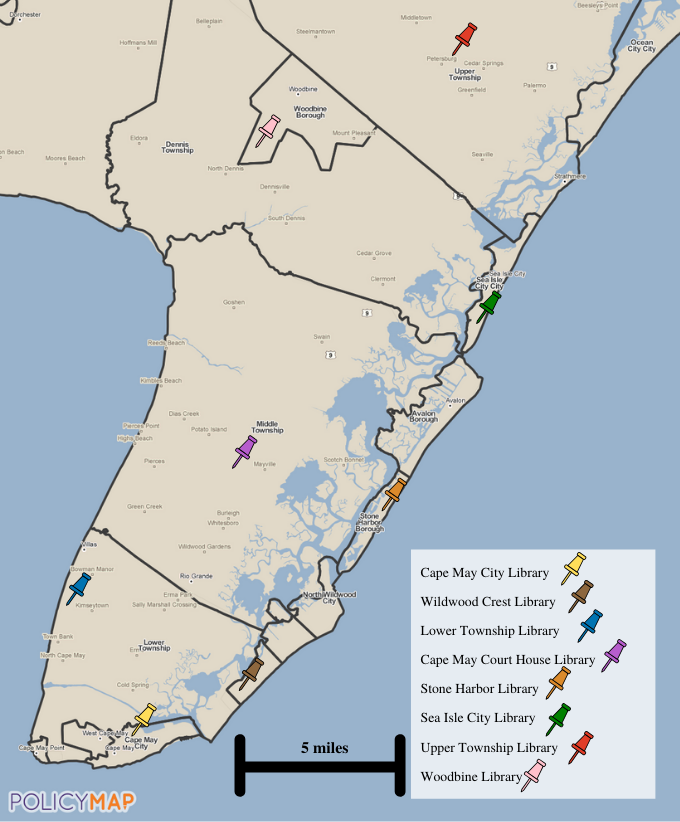 Upper Township is located in the north portion of the county, covering 62 square miles in which just under 12,000 people call home (See Census Reporter). Over the past year or so, programs have been canceled from the Upper Township branch due to low attendance. Low attendance at events leaves library staff with a difficult choice: Do we keep this event where it is and wait for attendance to increase, or, do we move it to another branch where more people might show up? When meeting the needs of rural patrons, the latter solution can cause frustration in the community. Compounding this issue is the fact that in Upper Township there are fewer public transportation options and a decreased ability to walk or bike to the library, owing to the dispersed rural population. The Cape May County Library is gradually reinstating adult programs in Upper Township, but the challenge of providing equitable services in very different communities within this rural county remains.

One issue of concern that is specific to popular tourist areas in southern New Jersey is nonresidents voting in local elections. Atlantic County, directly north of Cape May County, is a shore town where houses along the coastline are often assessed in the millions of dollars, many of which stand empty until the summer months. Non-permanent property owners in that county have formed the Margate Homeowner Association. Undeniably, these expensive homes and the taxes they generate are a benefit to public libraries. We learn in the Cape May County Herald that according to a member of the Margate Homeowner Association, “some property owners want more of a say in how their tax money gets spent...most of the taxes that fund local budgets are paid by homeowners who call somewhere else home.” Many permanent residents, in contrast, stand staunchly against nonresident voting in Cape May County. Gerald Thornton, the Director of Cape May County’s Board of Freeholders, has seen nonresident voting efforts come and go during his four decades in public office. In the interview with the Cape May County Herald, Thornton made a point of asking, “if property owners who reside out of the area dominate local politics, what could that mean for investment in off-season services?...If nonresident property owners have a vote on school budgets when they’re already funding the schools in their hometown, will they be willing to invest in local education?”

It should be noted that taxpayer associations in Connecticut, Delaware, and New Mexico allow nonresident voting in local elections, and 10 states allow nonresident voting in certain special elections (See National Conference of State Legislatures), so nonresident voting in tourist towns isn't entirely out of the question. If taxpayer associations were given increased voter rights, this could shift Cape May County’s economy in a potentially devastating direction for permanent residents. On the other hand, if there were more opportunities to help temporary residents feel part of the community, perhaps this tension could be alleviated, and temporary residents would be keen to support local infrastructures.

The issues and trends presented in this research encapsulate some of the opportunities and challenges rural libraries and their communities face. Library leaders in tourism-driven communities should set realistic expectations when engaging with both permanent and temporary residents. When considering the future of programming, services, and library resources, rural librarians should conduct rigorous assessments so that our organizational goals match our ever-evolving information services.

Consistently and equitably supporting the needs of evolving rural communities in Cape May County, and in growing recreational and tourist economies throughout rural America, will take a fair amount of strategic planning and a willingness to create new partnerships with business owners and tax paying residents, including temporary residents. Rural librarians can strengthen their services and relationships by stepping outside the box and having an open mind when it comes to re-thinking how we serve our rural communities.

Audrey Dingler will graduate with her MLIS from the University of North Carolina at Greensboro in December 2020. She currently works as Social Media Manager at the Cape May County Library. Noah Lenstra is an assistant professor of Library and Information Science at the University of North Carolina at Greensboro. He is an active member of the Association for Rural and Small Libraries and in 2016 started Let’s Move in Libraries.