Editor’s note: The Small Libraries Create Smart Spaces project used placemaking and design-thinking strategies to support libraries through a process that transformed their existing spaces in cost-effective ways and reimagined their relationship with their communities. The series of stories that follow summarizes the experiences of the second Smart Spaces cohort, who participated in 2019-2020. This fourth story in the series discusses the “transformation” phase of the design thinking process. For stories of the first cohort (2017-2018), see their Transformation Stories.

In the spring of 2020, the 15 small and rural libraries participating in WebJunction’s Small Libraries Create Smart Spaces project were on the verge of activating their newly transformed smart spaces with collaborative community programming; then the COVID-19 pandemic changed everything. Libraries closed their physical doors and the smart space efforts froze in time. With months of planning now on hold, participants engaged with the project in an unanticipated way: they turned to each other for support through the cohort discussion forums and virtual live sessions, first to share their realities and emotions, and then to begin to reimagine what connecting with their communities meant in this new, uncertain landscape.

Although these intrepid small libraries were not able to bring their projects to completion before the originally planned project end date of December 2020, they had acquired community connection skills that transformed their thinking about the library’s relationship with its community. Many experienced a mindset shift that they will carry forward into their library’s future strategic planning. Participants reflected on what part of the Smart Spaces project most resonated for them and what lessons they learned that are likely to have lasting impact.

The community discovery process was Allison MacKenzie’s favorite phase of the project. As the Director of the Fayette Public Library in LaGrange, Texas, MacKenzie learned to utilize discovery tools that encouraged her community to open up in new ways about what they wanted to see from the library. Learning to use observation as a means of gaining insight into her library community changed how MacKenzie looked at physical space. It reminded her “to continually look at how patrons come into the library and how they use the space once they are here, because just like programming and services, space is another thing that doesn't get evaluated as often as it probably should.”  MacKenzie thought it was amazing that changing one small space in the library based on community input inspired people to feel more connected to the library and other community members, and to see more possibilities for change and collaboration.

As the Library Director at the Waimea Public Library in Waimea, Hawaii, Michelle Young had difficulty narrowing down a favorite part of participating in the Smart Spaces project. “I think it was all my favorite part,” she says, “but the one thing that I really value and that I will take away is a changed mindset. To just ask people what they think.” Part of that changed mindset includes doing away with an expectation for a formal discovery process. Young learned that you don’t have to wait for a survey to be designed and approved to learn what your community needs. “Just ask people,” said Young. “Get people together. And it doesn’t have to be so formal or scientific.” Another lesson she learned is using what you have and not focusing on what you don’t. “Identify your assets and go from there.” This mindset is something that Young feels will be valuable for the library and for the rest of her career.

In the San Juan Islands in Washington, Lopez Island Public Library uncovered an interesting challenge in their community discovery process: resistance to change from the community. According to Malia Sanford, Library Programs and Art Director, the staff was fully on board with the ideas for active learning space, but responses from the community reiterated that “everything's great—don’t change anything.” So, Sanford’s favorite moment came from the transformation stage of clearing space before ideas and designs are solidified to upend conventional thinking. The library knocked out a wall and put a colorful rug down as the first step toward creating their new smart space. That change was enough to trigger excitement and enthusiasm from community members, helping them let go of preconceptions of what the library should be. “That was just such a great feeling,” reflected Sanford. “People were pulling me aside and saying, ‘It looks so wonderful. We love the new space.’ And that was right before we closed. So, we sort of closed on a high note.”

The Poy Sippi Public Library in Poy Sippi, Wisconsin, is the smallest of the participating libraries, serving a community of just 909 people. Director Jeanne Williamson experienced a reinvigoration in her library and community as a result of participation in the project. When asked about her favorite part, Williamson said,

“I suppose most would say all the new furnishings, materials, etc. My favorite part was the coming together of individuals to work on the remodeling of the library. Many of those people had not been in the library for years, but they heard of a need and came to help out. Not only did we modernize a section of the library, but those helping with the remodel fixed things that had not worked since ‘who knows when’—like the water fountain, which used to spray six feet in the air, or the exit sign over a door that people did not know existed. Now these individuals are regular users of the library and have introduced us to new patrons.”

For Yvonne Woytovich, Library Director, and Rachel Franklin, Branch Manager, the team at the Surgoinsville Public Library in Surgoinsville, Tennessee, participating in the project extended further than their planned smart space. One of the ideas that emerged from their community discovery process was the desire for an outdoor pavilion space. As changes began happening inside the library, word of mouth spread to a local company about the active space concept, and they offered to build the pavilion for the library—fortuitous timing for opening outdoor programming opportunities amid the pandemic. Woytovich and Franklin are excited to see what the future holds for Surgoinsville. For Woytovich, “seeing things come to life and learning that we do have that amazing support in our community is just fabulous.” 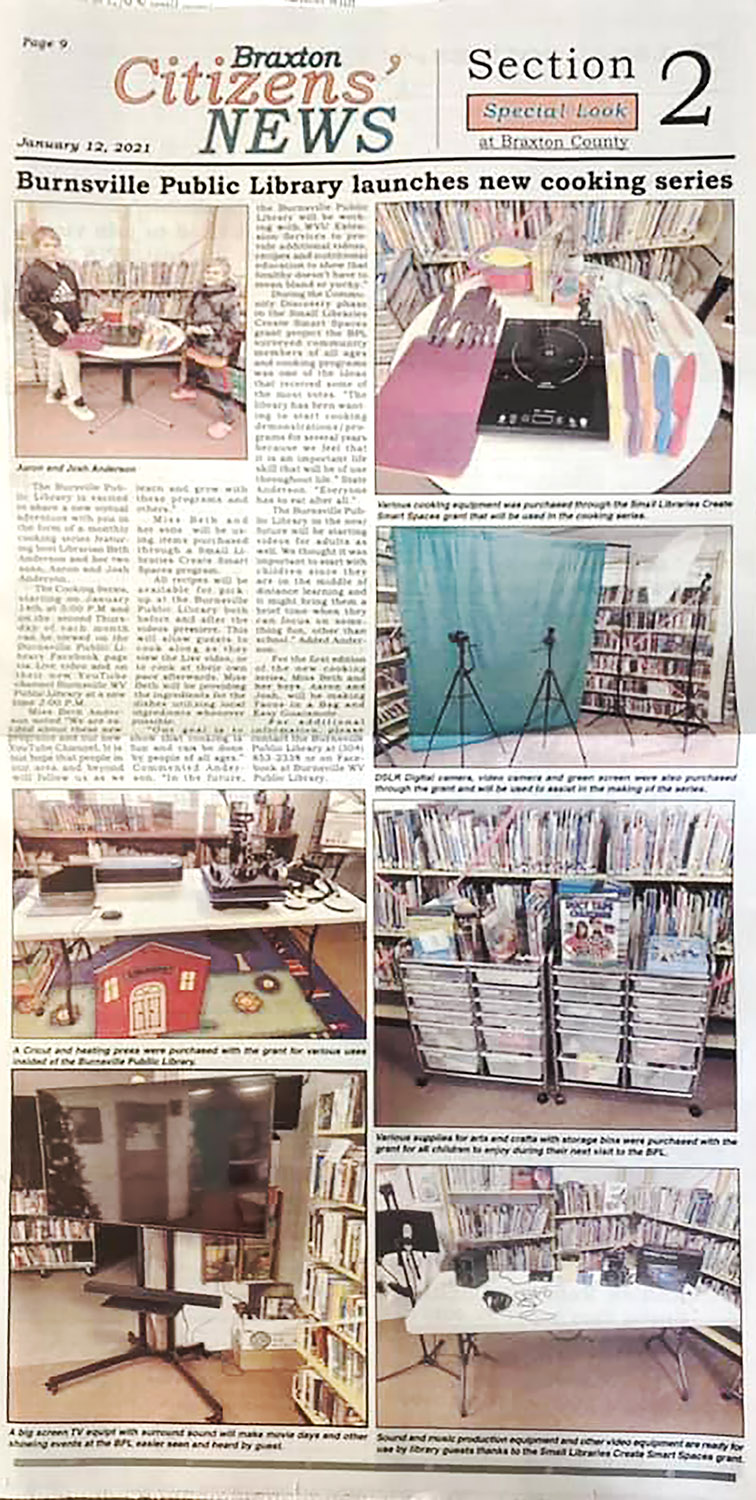 For the small town of Burnsville, West Virginia, participating in the project meant Burnsville Public Library Director Beth Anderson could continue her propensity to break the mold and get her community to think outside of the box. “I can't wait to be able to get people in here and actually use this stuff,” said Anderson, who has created a space for podcasting, cooking demonstrations, and audio production. The anticipation of community members is palpable. People can currently make an appointment, one or two at a time, to come into the library to see and experiment with the equipment. “To see that excitement on their faces, whether it's a kid or an adult is super exciting,” remarked Anderson. “I can't wait until I can get people in here and get them hands-deep playing with all this stuff.” Until that becomes possible, Anderson is producing a series of children’s cooking videos, using local and healthy ingredients as much as possible. The videos will be broadcast on the library’s new YouTube channel.

For Ingvild Herfendahl, Library Director at the Dodge Center Public Library in Dodge Center, South Dakota, “Small Libraries Create Smart Spaces has been a great process.” Herfendahl had furnished their new smart space and even opened it up to family use before the pandemic forced a shutdown. The main feature is a play loft, beautifully constructed out of wood, inviting kids to climb up to a platform or shelter in the cozy space underneath. “We redesigned our kids’ area, built the loft, and started a play group. One of the first days that the space was opened, there were kids that didn't know each other that were playing together. And in the background, the parents and the daycare providers were talking to each other, sharing ideas, and I said, ‘Yeah, this is exactly what we were hoping for.’ I see those connections as a huge goal.” One lesson learned for Herfendahl is seeing how important making new connections between different members in the community is. These are relationships that Herfendahl sees extending well beyond the pandemic. “It will be a destination for people, not just a hangout.”

The smart space in the Beardsley and Memorial Library in Beardsley, Connecticut was able to open, with restrictions, in June 2020. Even though it has been exciting for the team of Library Director Karin Taylor and Librarian Assistant Carol Parent to see the space being utilized, what Taylor has loved most about the project is that “it really changed the way that we approach everything overall as an organization now.” They have applied some of the design thinking strategies and tools learned through the project to address the unanticipated challenges encountered with the pandemic over the past year. An example of this was that when the State of Connecticut announced the availability of grant funds to help libraries remain open and better serve their communities, Taylor and Parent adapted their traditional approach. “Rather than just buying a bunch of stuff and doing different things without first consulting the public, we went to the public and to schools and asked, ‘How can we help you and serve you better.’ So it's changed the way that we approach things. [Small Libraries Create Smart Spaces] gave us the tools to do that.”

The full actualization of these libraries’ smart spaces is deferred for a while longer, but the project set in motion transformation processes that have already positively impacted the participants and their communities. The changed mindsets will transcend the upheaval wrought by the pandemic because they are centered on community connection and collaboration. Participants found the joy of discovering the deeper interests of their communities and the strength of integrating them into library planning and programming. These strategies will continue to bolster their resilience into the future.

Read the three other stories in this series, summarizing the experiences of the second Smart Spaces cohort as they moved through the design thinking process:

The Smart Libraries Create Smart Spaces project was made possible by support from OCLC and a National Leadership Grant (project number LG-80-16-0039-16) from the Institute of Museum and Library Services. The Association for Rural and Small Libraries was implementation partner for the project.