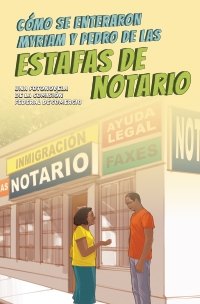 The Improving Access to Civil Legal Justice through Public Libraries initiative aims to help you to learn about ways to support patrons’ civil legal information needs. One learning is the importance of understanding how the meaning of words can change with improper translation, especially with arcane legal terminology. When providing information and services to Spanish-speaking patrons, being aware of "notario" scams can help protect your patrons from fraud.

Many libraries provide services of a notary public at their branch. A notary public provides patrons with a witness and an official stamp when signing a legal document, such as a will or health care directive. However, in many Spanish-speaking countries, "notario publico" means something very different—a "notario public" is an attorney or a high-ranking official, such as a judge.

If your library offers notary public services, especially in a community with Spanish-speakers, it’s critical to avoid this implication. Do not use the literal translation of "notario publico" (public notary) because patrons will expect the delivery of legal advice – something library staff cannot do (see video Legal Information vs Legal Advice). If translation is necessary, a court translator recommends using the term "fedatario" or to use the English "notary public" and emphasize that this is not the same as a "notario" (explore further in Word of the Week: Notary Public).

The Federal Trade Commission (FTC) provides numerous resources to support libraries to protect patrons from scams and fraud (Check out the webinar, Scams, Fraud and Identity Theft: How Libraries Can Help). In a blog post, Notarios are no help with immigration, we learn to be aware of deceitful individuals who capitalize on the confusion around "notaries," who take people’s money and documents and do nothing to help with their legal issues.

The FTC offers free copies of How Pedro and Miriam Learned About Notario Fraud, a graphic novel that shows some of the ways people get scammed while seeking immigration help. It also shows where people can go for real help. Copies of this fotonovela are available in Spanish and can be printed to share with your community. (Note: FTC has temporarily suspended bulk order fulfillment due to COVID-19, but check back in April.)