Located in northeastern Lorain County, Avon Lake Public Library received a 2016 Ohio LSTA Summer Library Program grant from IMLS to create a children’s garden in an exterior building bay, just outside of the Children’s department. The garden was the focal point of our summer reading program, “ALPL Had a Farm, ABCDE.” Not only did we want our young patrons to learn about farming, farm animals, and raising food, we also wanted them to experience the enjoyment and fulfillment of digging in the dirt and planting, harvesting and eating vegetables. In addition, we wanted clients of Community Resource Services, a local non-profit that is an arm of the Salvation Army and the Second Harvest Food Bank of North Central Ohio, to benefit from the fresh produce grown in our garden. 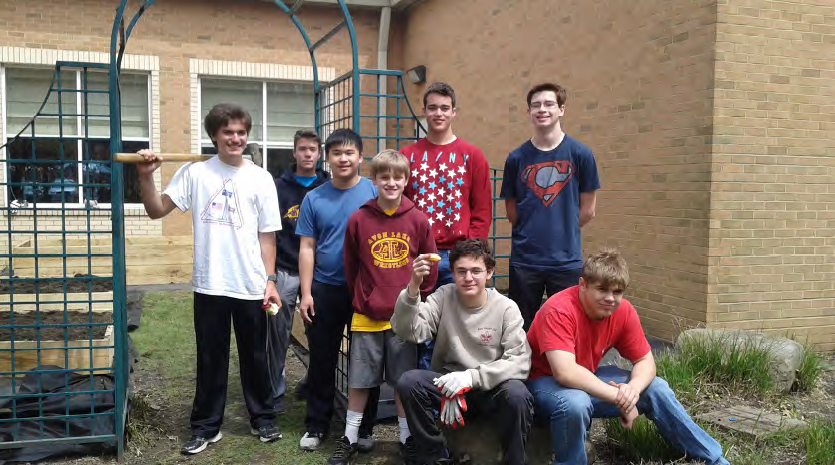 Early on in the planning process, our Children’s Services Manager was approached by a Boy Scout interested in gardening, who offered to partner with us on creating the garden as part of his pursuit of an Eagle Scout Award. Unsolicited, we also heard from master gardeners in the community with tips on planting our garden, a bee aficionado who gave us a bee house (for non-stinging Mason bees), and an expert on deer fencing (Avon Lake is over-populated with deer).

On a crisp Saturday morning in late April, with help from our Boy Scout, his friends and many adult volunteers, we installed five raised garden beds (each 4’x8’), filled them with rich soil, and spread the walkways with pea gravel. Several days later, our Site Manager installed the deer- and rabbit-proof fencing. Both seeds and sprouts were planted in the beds, including tomatoes, beans, peas, lettuces, eggplant, cucumbers, beets, zucchini and radishes. The three brick sides of the bay and the arc of the sun, in tandem with the rich soil, created a mini-greenhouse effect, and everything grew like wildfire!

Inside the library, we offered many programs throughout the summer related to our garden and farming. A local 4-H club brought farm animals to the library once a week for patrons to meet, touch and learn about. We incubated 14 chicken eggs at the Children’s desk—watched over by a 24/7 “chick cam”—and 12 hatched. After ten days of peeping and cheeping in the department, the chicks were given to two local farms. Fifty children participated in our weekly “Playing in the Dirt Garden Club.” Every session started with weeding the beds, followed by learning about some aspect of gardening and tasting whatever was ready for picking, and ended with quiet time to record thoughts and draw pictures in a garden journal. We used the journal as a program evaluation tool. Parents looked on in amazement as their children ate vegetables they would never sample at home! By the end of the growing season, the little red radish was declared the overall favorite. And even though garden club children were welcome to take home vegetables, most of the children gave their bounty to feed those who seek assistance at Community Resource Services.

The outcomes of our garden far outweighed our investments of time and money. We discovered: 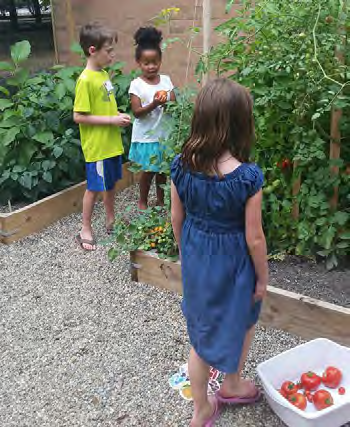 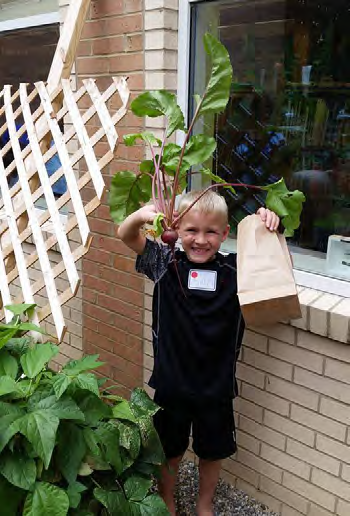 Our children’s garden was pleasurable on so many levels. There is a huge amount of competition for children’s time in our community, including the lure of electronic devices. We were pleased that many children wanted to dig in the dirt, touch worms and ladybugs, pet farm animals, learn about bees, watch eggs hatch, and sample vegetables. They became scientists through direct observation, recording their findings in their weekly garden journals. They became cooks when they attended Chef Amee’s cooking with vegetables class. They became artists when they participated in a program on “painting” with vegetables. They became charitable when they harvested vegetables for others not so fortunate to have enough to eat. They became responsible citizens every time they tended the garden and gave back to their community. The grown-ups may have created the garden, but the children of Avon Lake brought it to life through their curiosity and delight.

Read about other seed library examples and resources in Growing Library Garden Programs.

This story was originally published in Ohio Libraries Quarterly and is republished with permission. All images provided by Avon Lake Public Library.