Board in the Library, Part Deux

We are pleased to publish this article, the second in a six-part series on board game programming in public libraries, from John Pappas, the Branch Manager at the Bensalem Branch of the Bucks County Free Library System. (Read Part One | Part Two | Part Three | Part Four | Part Five | Part Six) 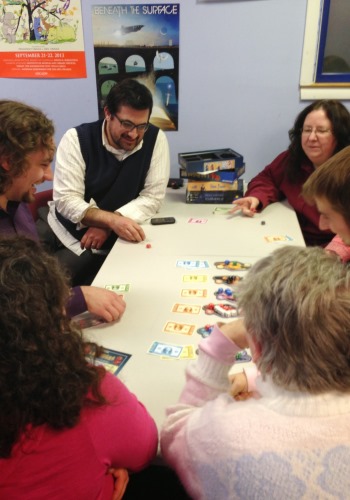 The scope of board games has exploded in the past 10 years and provides a major hurdle for new gamers as well as for those stalwart librarians attempting to create a gaming environment in their library. While this broad, colorful swatch of games provides plenty of variety, it can be intimidating to the uninitiated and those new to the hobby. In this article, I will provide a list of board game types which will move from the classic folk games of yesteryear and the mass-market games of your childhood into the wide diversity of modern board games. In each list item, I will describe the category, introduce traditional ways in which this category is incorporated into the library space, and provide a brief mini-review of a few games of merit. My big four are classic games, party games, gateway games, and filler games.

These are the abstract board games people are practically born recognizing and knowing how to play - checkers, chess, cribbage, go, dominoes, parcheesi, card games using a standard 52-card deck, etc. Classic games do not tend to have any attributed authorship, no recognized designer, nor much narrative potential (they don't tell a story). Even "themed" chess sets barely scratch the surface of a thematic experience and generally no story evolves from playing a couple of games of checkers or dominoes. This hardly makes them boring though. Classic games have been passed down through the generations and potentially experienced several cultural iterations making them streamlined and at times deeply strategic and engaging. However, in the end, they are highly recognizable to the point of being innocuous.

What to do with them? Potentially you can start up a chess club or tournament if there is an interested (and skilled) staff-person or volunteer. However, my preferred use of classic games is  to start a "game hub" in the library. A game hub is an area or table dedicated solely to games and play. In my branch the first table when you walk into the library has a small spread of classic games (chess, checkers, dominoes) as well a some mass market games (Scrabble, Bananagrams). A hub like this can be stocked with inexpensive, easily recognizable, and quickly played games and potentially serves three additional purposes: 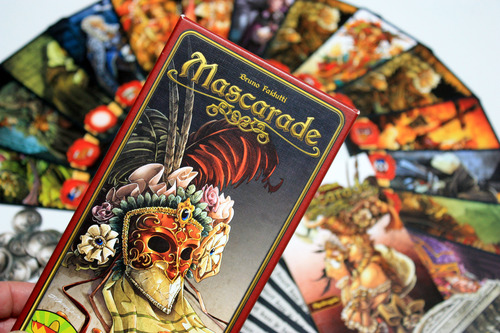 Party games primarily encourage social interaction and extroverted performance before developing a winning strategy. They are distinguished from other, more complex games by a simpler set-up, quicker-to-learn rules, and accommodations for larger groups. Another attribute of many party games such as Apples to Apples, Wits and Wagers, or the seriously NSFW (or library!) Cards Against Humanity is that having a winner is not as important as the interaction, memories, and laughter that come along with the game, making party games more social and experiential. For this reason party games can be easily incorporated into other (non-gaming) events.

Extra Points: check out Cards Against Librarianship and use them at your next inservice or create your own!

What to do with them: Similar to the gaming hub of classic games, party games can become a staple of any library space. If there is time before an event, party games are a wonderful way of encouraging play while waiting for the main attraction. Similarly, young adult programs can be supplemented with a party game as an icebreaker, to pass time, or as an essential part of a meeting (such as a Teen Advisory Board Meeting brainstorming session starting with a round of Cranium). Since these games encourage social interaction and

Examples: The usual holiday cache of games found in your closet at home - Trivial Pursuit, Apples to Apples, Balderdash, and Wits and Wagers are all easy enough to find, learn, and set-up. However, if you would like something new and adventurous then follow me into a world of intrigue and deception with: 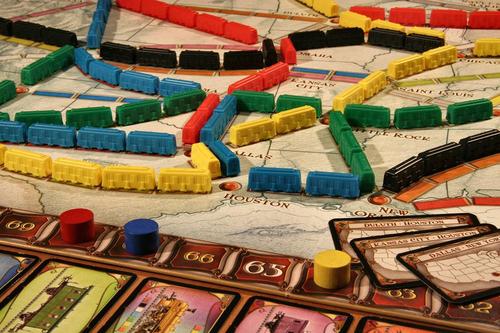 A "gateway game" is any game with simple rules that is easy to teach to new players. This is the perfect genre of game to attract new players to board gaming as a hobby. These are the games which take the gaming experience one stuttering step beyond the dingy mass-market monopoly into the sunny world of modern board games. Since experiences will vary across different people, making a definitive list of gateway games is difficult. For example, I came to the board game world after an adolescence of role-playing games (RPGs) so the best gateway games for me were games with a rich narrative arch, well developed characters, and plenty of storytelling. So what introduced and originally attracted me to the hobby (for example, Munchkin and Zombies!!!) may not be as attractive to others.

Either way, if you are planning a board gaming group for your library and want to attract both new and experienced (or emerging) gamers, then gateway games are a natural place to start - they are easy to learn but still provide a wide enough decision space to appeal to experiences players. These games likely have more rules than most mass-market games but they won’t be overwhelming and still can be quickly learned, referenced and set-up by even the most inexperienced gamer. They usually have less intricate or fleshed out themes from other modern games, but are still fun with new and potentially unfamiliar mechanisms to enhance the game-play. In addition, some gateway games are now getting almost mass-market appeal, showing up in Barnes & Noble, Target, and Toys R’ Us as well as online at Amazon.com.

What to do with them: These games will make up the bulk of your board gaming collection and will likely be the most played at board gaming events. Staff can familiarize themselves with the rules and game-play quickly and be able to introduce and teach them to attendees. They set up fast, play in under an hour (so they fit into your standard library program), and are generally well-vetted by larger board game publishers (i.e. they are usually in print and affordable). They don't tend to play as many people as a party game so consider 3-5 people to be the optimal number for a gateway game. This means, of course, if your goal is 10 attendees, more than one table is needed and more staff or a knowledgeable volunteer is required to help moderate.

Do not underestimate the value of a good gaming volunteer! Feed them, bribe them with games, do whatever you need to do to keep them. 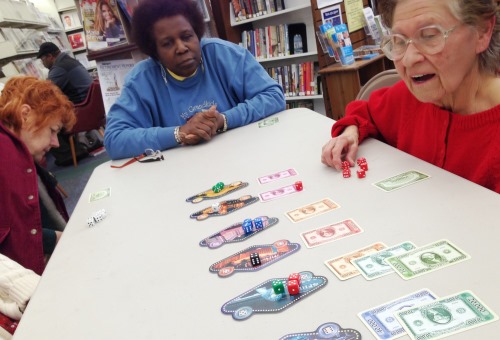 Also keep in mind, a new attendee may not be comfortable picking up a new game, learning it, or gathering up a group of people to play. They will go to something familiar with the lowest barrier to entry. So, if you don't have extra staff or volunteers on hand, you can pepper your collection with some easily recognizable party, mass-market, and classic games. Don't turn up your nose to what has proven to work - however, if you would like to travel with me into the deepest, darkest jungle of board gaming, sharpen your axe and journey into the: 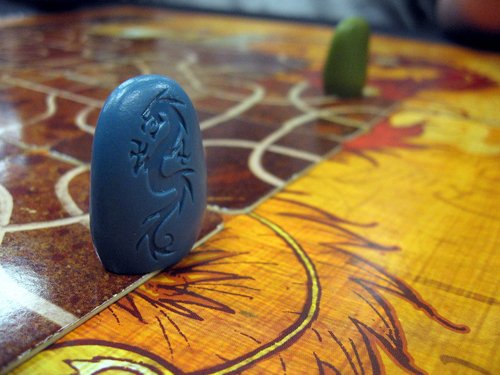 Even easier and simpler to play than gateway games, filler games are slim in both rules and in the time spent playing. They are meant to "fill" the gap between larger games or while players are arriving or leaving an event. Personally, I think these games get overlooked and undervalued. They are simple but can be great fun. Several rounds of a good filler game can be just as much fun as something larger and more complex all for a much lower hurdle of entry. Along with the gateway games, these filler games are getting carried in more and more stores and can be easily found on Amazon.

Where do they go? Filler games are so tiny, they fit anywhere in the library. Stick Zombie Dice in a gaming hub. Place Sushi Go! in a study or meeting room. Keep a few in the board game collection for any gaming event. Use them as gateway games for younger teens and older adults. For my Golden Gamer’s 65+ gaming group, I use almost exclusively filler games to provide an extremely easy, quick, and fun introduction to gaming. From there our group may move into more complex gateway games as players become more familiar with game mechanics. 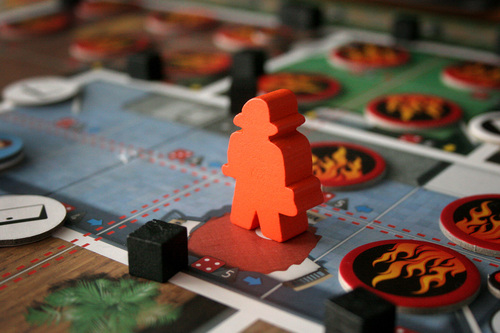 Scott Nicholson's words: "The idea of a 'Bait Game' is that it is short, easy to teach, visually attractive, and instantly engaging. It's a game that you can have out on a table and someone says 'Hey, what's that?' It's a game to have out alongside video games and draw people over to try it. If someone watches a Bait game in action, they should be able to get a basic idea of what's going on from watching it for a short while" [BGG, 2009].

Personally I am looking at anything that draws a crowd. If you want to generate some buzz about your gaming events or group then put out Rampage, Space Cadets: Dice Duel, or Going Going Gone! on a table with a few players and you will get people to stop and look.

My favorite "bait" game is Flash Point: Fire Rescue. It is not as fast as some of these others and is certainly not simple (although the "family" version can get set up quickly). Despite the length, people playing will be screaming and talking to each other and laughing in no time. It was one of the only games where, when we won at the end, everyone in the library cheered.

A few other examples:

The Games are in the Tubes

We've covered a lot today! Now that we have lots and lots of games to explore let me recommend a few YouTube channels that can be a wonderful resource to learn games, discover how they play, and see first-hand the type of player interactions that they engender.

Goodness! Will you look at the time?

The next article in my series dives into two mainstays of board gaming: Strategy Games and Thematic Games. I'll start to explain the difference between theme and mechanics and how the two intersect for an amazing gaming experience. If you want to interact with me on all things library, board gaming, or the intersection of the two then you can find me on Twitter, Google+, and (barely) on Facebook. You can follow my personal blog or check out my board game reviews at Troll in the Corner. If you are in the Philadelphia region then stop by the library to check out the game collection or to, you know, play some games!