From Awareness to Funding: 5 Probable Supporters and How to Reach Them

If you work or volunteer in a library, you may have heard about the report, From Awareness to Funding: Voter Perceptions and Support of Public Libraries in 2018. If you haven’t read it, here’s the good news: compared to 2008, more voters think of libraries as hubs for connecting, learning, and skill-building. The not-so-good news: most voters don’t understand where library funding comes from, and they are less committed to supporting tax-based library funding than they were a decade ago. See WebJunction’s director, Sharon Streams, discuss the report in greater depth during her booth spotlight presentation at ALA 2018.

But back to good news. Information is power. Now that this information is available, how can libraries educate and influence the citizens who hold a library’s fate—or at least its budget—in their hands?

The report segments voters into four tiers based on attitudes, perceptions, and behaviors: Super Supporters (6.5%), Probable Supporters (25.6%), Barriers to Support (39.3%), and Chronic Non-Voters (28.6%). Super Supporters value libraries and are committed to supporting library funding. Chronic Non-Voters were eliminated from further analysis for the report because they are “outside the influence of libraries.” The remaining tiers are subdivided to show more precisely how they are using the library and what drives their voting behavior.

5 Types of Probable Supporters and How to Reach Them

Like Super Supporters, Probable Supporters understand the value of the library as a community resource, and as a group, 64% of them say they will definitely vote for library funding. This is a decrease from 80% back in 2008. At nearly 26% of the voting population, Probable Supporters can have an impact on library funding, and their trust in libraries makes them receptive to messaging about why public funding is so vital. Here’s some advice on how to reach each of these groups.

This group is 61% Baby Boomers, and they feel the library is an invaluable resource, both as a source of information and as a community gathering place. Despite that, they’re not frequent users, with an average of six visits per year. They are more likely than the average voter to support a library funding referendum, and 40% of them have supported library funding through a private donation.

Reach them electronically. According to Forbes.com, Baby Boomers are more tech savvy than they often get credit for, with 95% of them on email, and 92% choosing to shop online. Don’t be shy about reaching out to this group electronically, whether that’s by email or Facebook. The majority own smartphones, so making your content mobile-friendly is just as important to this group as younger generations.

Offer quality content. Boomers are readers, and they want real content. When library funding is on the ballot, tell them about it, ask for their vote, and explain why it matters in a clear, substantial way.

Ask them to give. This audience is likely to support Friends of the Library fundraising efforts because they believe in your mission. Less than 30% have children at home and are likely to have more disposable income. 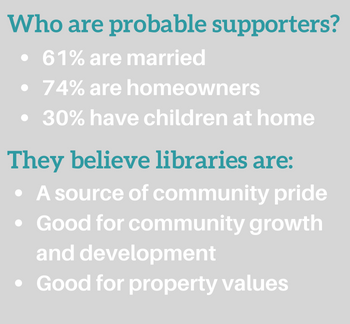 Librarians, these are your fans! They believe in your expertise and they trust you—yet their use of the library has declined, and fewer of them see the library as an essential service. Forty-five percent of this group are likely to vote for library support.

Like the Greater Good group, they are primarily 50+ with no children at home, so you can reach them in much of the same ways, with messaging that emphasizes the value of your library staff.

Draw a direct connection between funding and staff. How does voter support translate to the hiring and professional development activities of your library staff? Try a Meet the Librarian series of social media posts in which you showcase the work your staff is doing on behalf of the community, and how voter support makes it possible.

This the smallest segment of Probable Supporters, but these are serious users, with an average of 26 visits per year. They are primarily male, small business owners, with 37% falling under the age of 29. They use the space for job-seeking, research, and equipment like printers, and they feel that library resources are better than what they’d find from a search engine alone.

They want a quiet, comfortable place to work and access the latest technology, and their satisfaction in that arena has declined in the last ten years. Not quite half report that they would definitely vote for library funding.

Consider targeted programming. Remind these users that you’re supporting their needs by creating targeted programming. Host networking events or create a speaker series for small business owners. Partner with a local business incubator. Watch the recording of this webinar on how to support small businesses in your library, and check out how the Cecil County Public Library in Elkton, MD, offers free business help for patrons.

Reach them where they are. Sure, you can reach these users via technology, but they’re also in your library. Set up a display with books targeting this group, along with information about your library’s programming, and any upcoming ballot issues that affect the library.

Ask them to give. This group is among the most likely to donate, so don’t forget to ask!

In 2008, 48% of this group felt the library should be “a place for communities to gather,” and this percentage has increased to 58% in 2018. However, their visit frequency has declined, as has their belief that libraries are a good source of homework support for kids. Their confidence in library staff to understand community needs and work with political leaders to obtain funding has also declined, and they are less committed to voting for library funding, with only 30% saying they would definitely vote yes.

In a nutshell, the Kid Driven group are less convinced of the role libraries play in children’s lives. What can be done to engage an important but increasingly disengaged group, and demonstrate the library’s value?

Tell your stories. If your community doesn’t know about it, did it really happen? When possible, tweet, post on Facebook, and blog about the advocacy your staff does with community political leaders on behalf of the library, the communities you serve, and the programs that make your library a uniquely valuable resource. Don’t be afraid to repeat your messaging across multiple channels.

Engage your users for feedback. If you want to learn more about how to assess your community’s satisfaction and needs, check out this list of training opportunities for assessment, evaluation, and planning. It’s possible that you already have the programming to meet their needs, and they just don’t know about it yet. You might also uncover new ideas.

This group feels great about what libraries have to offer, from services to staffing. They make about 14 visits a year, although that’s a more than 50% decline from 2008. They’re frequent users of library websites and Wi-Fi, and they’re likely to be 50 or older. Their commitment to library funding has remained steady, with 36% saying they would definitely support a referendum, and 46% reporting that they would pay higher taxes for library funding.

Don’t let them get lost in the shuffle. The easiest way to get voter support is to retain those who already believe in you—but it can be tempting to focus on swaying your skeptics while forgetting about your loyal friends. Thank your supporters often and let them know they’re making an impact. When a voter referendum passes, post a thank-you to social media or send an email, or hang a thank-you banner in your library.

These are just a few ideas to communicate with and engage your community. Consider your unique understanding of what’s important to your community, and communicate openly, clearly, and often about how voter support empowers the library to be an agent for good.