We couldn't help but notice a Facebook post that mentioned this successful program idea, and we just had to know more. Judith R. Wright, Teen Librarian at Homewood Public Library in Homewood, AL, was kind enough to share more information including the materials she created. The program was for all ages and could easily be tailored for any subject, but why would you? Grab a cheesecake and get ready for fun at your library. 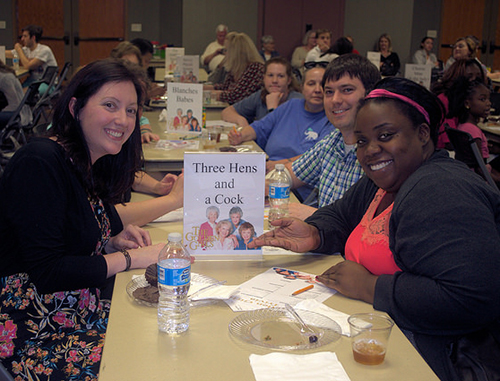 The idea for a Golden Girls Trivia event actually originated from our Children's Services Librarian, Laura Tucker. When she brought the idea to me, I knew we would have a hit on our hands! We grew up watching reruns of The Golden Girls! Trivia is a growing and popular program theme at our library, as we found out with our string of successful Downton Abbey Tea and Trivia programs. We were also brainstorming on creating more programs to catch the eye of millennials. The Homewood Public Library encourages departments to collaborate together, which is how the Teen Librarian and head of the Children's Department hosted an adult trivia program with over 70 participants!

Though our previous trivia programs featured patrons answering the questions individually, for the Golden Girls Trivia program, we decided to host this as a team event. We created a registration page for teams via Google Forms. Each team was allowed four participants. Registration was limited to 20 teams, because that was the maximum capacity of our largest auditorium. Registration filled up a week before and every single team showed up.

We started the trivia program by singing The Golden Girls theme song from a YouTube video I pulled up and projected on our large screen. Participants loved it, as you can see in this video. This really set the mood. 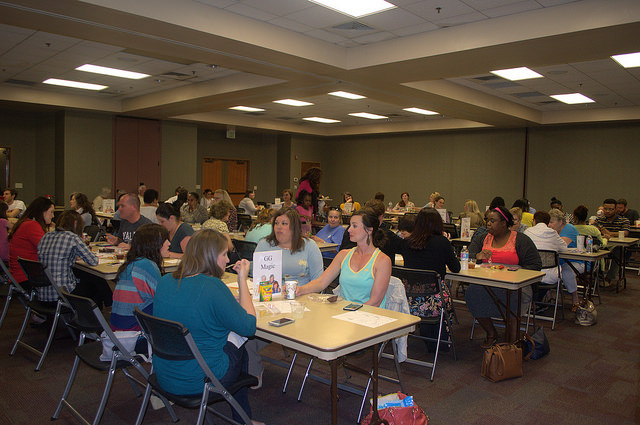 While I started asking Round 2 questions, the staff member in charge of keeping score would tally up the teams' correct answers from Round 1. Make sure the scorekeeper has a handy sheet with the answers. This is the one thing we forgot to do. We ended up setting up a laptop for the scorekeeper with the PowerPoint presentation, so the scorekeeper was able to start tallying up scores as soon as teams turned in their answers.

We served fruit, finger sandwiches and, of course, cheesecake! We bought sample cheesecake bites from Sam's Club and they were a big hit. For prizes we created gift baskets with free ARC books, chocolate bars, gift cards and seasons of The Golden Girls on DVD.

We ran this program with two staff members: one for the trivia and one for entering in the answers. Having a third person to take photos and refill the beverages and food tables would have been ideal.

Golden Girls Trivia was a free program. However, we put out several donation jars and patrons were quite happy to donate. 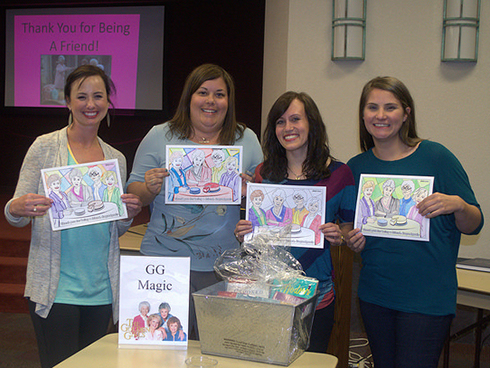 It was so much fun! We have several more upcoming trivia programs including Harry Potter trivia in August and Doctor Who in October. We are also hoping to host trivia nights around the Gilmore Girls, Buffy the Vampire Slayer, and possibly Sex and the City. We have received many requests for a Friends trivia night, so we are trying to work that one in as well.

I added the files to Google Drive to make sharing easier.

There are five files:

1. Golden Girls Trivia.pptx: Includes five rounds of trivia questions (with GIFs) and a bonus question. The trivia instructions are included at the beginning of the PowerPoint presentation. The questions were pulled from hours of watching The Golden Girls and from Thank You for Being a Friend: A Golden Girls Trivia Book by Michael Craig.

2. Golden Girls Coloring Sheet.pub: This was published online right before our trivia program and I was so thankful. We printed out enough for every person. It was a great conversation piece and gave participants something to work on after they had answered their questions.

3. Golden Girls Excel.xlsx: This is what I created to keep up with the score. At the time of registration we allowed each team to pick a team name. I plugged in the team name into the Excel file so we could easily keep up with the score. The file already has the formulas plugged in so no worries on that. Just add your team names then start adding their correct points per round.

4. Golden Girls Team Names.pub: The team names were hilarious (as you can see from the Excel file). I wanted to show off the names, so when the teams entered the auditorium, each table had an acrylic sign with a team assigned to that table. The other teams loved seeing the team names.

5. Golden Girls Scorecards.pub: This file has two pages. The first is a full 8.5 x 11 page that the teams kept. This way they could keep up with their score. The second page is the individual score cards that they would submit after each round with their answers. We gave each team seven slips: five rounds, one bonus and one extra.

View photos from the event here.

If you have any questions, please let me know! If you end up using the program, please send pictures! I would love to see it. Also, if you have had any successful programs, I would love to hear about them. I'm always looking for new ideas.

Top: Just one of the 20 teams having fun at the Golden Girls Trivia Program.

Bottom: Winning team GG Magic poses with their colorful masterpieces and their prize.

All photos by Laura Tucker.