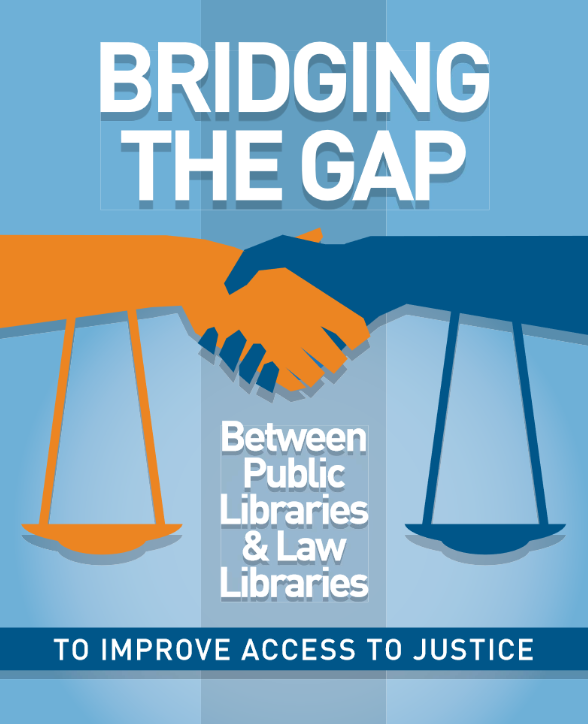 Article originally published by the American Association of Law Libraries in Vol. 25, No. 4 (March/April 2021) of AALL Spectrum. Posted by WebJunction with permission.

The struggles low-income people face in accessing justice are well documented. These struggles have inspired advocates to search for innovative ways to effect meaningful change. One of the more exciting developments in recent years is the focus on the role that public libraries play in this effort. Public libraries exist in every corner of the country, even in the most remote regions, and libraries are typically well regarded by the community. Librarians are often considered friendly, trusted authorities by patrons, who have all kinds of research questions and needs.

However, public librarians are sometimes hesitant when legal reference questions arise. They fear committing "unauthorized practice of law" or are unsure of the line between providing legal information and legal advice. Law librarians can step in and help. We are experts in this area and, as we are also librarians, public librarians feel most comfortable talking to us about their concerns. The Legal Services Corporation and OCLC recently recognized the importance of these collaborations by creating two new courses: "Improving Access to Civil Legal Justice through Public Libraries," a live online course that was developed and taught this past spring by American Association of Law Libraries (AALL) members Sarah Larsen, Catherine McGuire, and myself, who then also helped develop a self-paced course, "Creating Pathways to Civil Legal Justice," that is still open for enrollment. The courses were developed to boost public librarians' skills and confidence when encountering legal reference situations, and to encourage them to pursue ongoing partnerships with local law libraries. 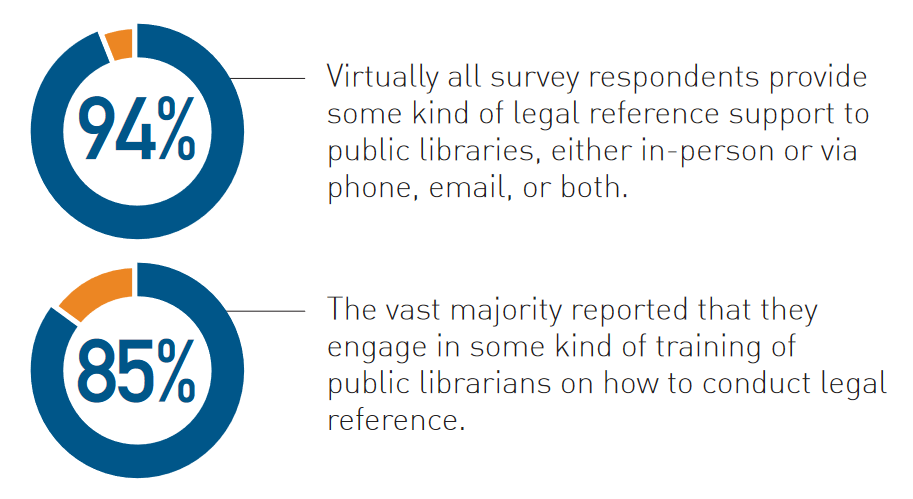 of law, and 61 percent train them on authoritative legal reference resources. Around 21 percent organize "ask a lawyer" or legal clinic events with public libraries, and another 15 percent also produce some kind of newsletter or other communications directly to public libraries. Other partnerships include providing public libraries with access to legal databases and print legal collections, helping with presentations to the general public, and producing legal research guides, both in print and online. Survey respondents reported that feedback from the public libraries has been "overwhelmingly positive" (a phrase used by multiple respondents), and that the partnership benefits both the public library and the law library. Tawnya Plumb, head of collections at the University of Wyoming, George W. Hopper Law Library, recently used her spring sabbatical to "advance state access to justice initiatives by training Wyoming librarians in every county on the availability of free legal resources and services." She noted, "Initial feedback indicates that participants consistently felt more comfortable fielding legal research questions after my presentation than they [did] prior to attending the training. Attendees also indicated an increased familiarity with the free legal services offered within our state, and they appreciated having new referral options." Sarah Larsen, outreach librarian at the Minnesota State Law Library, stated, "We have also had a number of opportunities to collaborate with the public library social worker on problems that have both social and legal implications, and that has been an extremely positive experience for both of us." Aaron Glenn, reference librarian at the University of South Carolina Law Library, commented, "One type of constructive feedback that I’ve received from public libraries relates to the planning process when proposing new topics for presentations. When working with a partner library on multiple events, this kind of feedback has helped to narrow my focus to the topics that would be the most useful and that would make the most effective use of the time allotted for our events."

Of course, challenges can arise in any type of partnership. For example, who "owns" the program can create some tension. Joan Bellistri, law library director at the Anne Arundel County Public Law Library, noted, "When it was an in-person program the branches were very supportive. They advertised the program in the event catalog, did all of the room set-up, and helped with the sign-up. When we had to switch to remote with the court and public libraries closed to the public, the public library did not want to include the program in their event flyers anymore since it was not technically taking place in those branches." Also, public libraries are open and welcoming spots for everyone. This can mean a safe space for people who are experiencing mental issues—but also a challenge for the staff working with them. Liz Reppe, state law librarian at the Minnesota State Law Library, commented, "We also have one branch that has issues with fights and mentally ill patrons. I offered the librarians the option of stopping our visits there. They wanted to continue, but talked to the manager about our concerns and moved the desk to an area that was more visible and closer to the guard." On the other hand, sometimes there are technical challenges. Malinda Muller, director of patron services at the LA Law Library, remarked, "When we had books, ongoing training of in-house staff to do the filing was a bear. Once we donated the collection (i.e., when we were no longer paying for the updates) to the host library, we gained not only cost savings, but more time to assist in the field and save our in-house technical services team from constantly ordering missing pages." Then there are the challenges that are personal to us as social, emotional beings. Plumb elaborated, "It is tricky to determine if a lack of response [from the public library] is based on a lack of interest, or if it is a breakdown in communication. I try to find a balance between establishing a connection and respecting rejection."

Creating lasting relationships is key to the success of these partnerships. Jenny Silbiger, state law librarian at the Hawaii State Law Library, remarked, "I think nurturing and developing relationships with someone who is as interested in public programming as you are is key. My initial partnership started in 2014, and six years later, we still work together and stay in close contact. I’m always sharing information with the public libraries and thinking of how I can bring them into the conversation." Richard Leiter, director of the Schmid Law Library and professor of law at the University of Nebraska College of Law, commented, "Every year or so we host a group of public services staff from the Lincoln Public Libraries for an afternoon at the law library. We provide a tour of our library and end with a session [that includes] our staff and theirs in a roundtable discussion and orientation. We've found that establishing connections in this setting helps people communicate effectively when helping patrons who may wander into the public libraries wanting to do legal research." Feedback from the OCLC courses, which were attended primarily by public library staff, indicated a deep enthusiasm for these types of partnerships. Interestingly, however, many public librarians reported that they had never had any connection to the law libraries in their state prior to the courses. Have you reached out to your public library yet?