Bookmobiles that Break the Mold

Bookmobiles, or mobile libraries, have been around since the 19th century, when they were horse-drawn wagons bringing books to rural communities. Government funding in the 1950s and 60s created a bookmobile surge, and popularity has risen and fallen since then, along with the price of fuel and digital technology.

Today’s bookmobiles carry out the same mission of those horse-drawn wagons: expanding access to library resources. But these bookmobiles are far from old-fashioned. Check out how libraries are adapting this hundred-year-old concept to their community’s needs.

Grandview Heights Public Library (GHPL) wanted to improve their outreach without the expense or the fuel costs of a full-sized bookmobile. Their PopUp Library is electric and about the size of a golf cart. It’s not setting any land speed records with a top speed of 25 mph, but in this central Ohio city of fewer than 10,000 residents, it’s just what they need to hit the local festivities and entertainment venues for less than the cost of a traditional bookmobile.

The concept for the vehicle was inspired by a similar mobile library that GHPL’s director, Ryan McDonnell saw in Washington, DC. The vehicle is a modified version of a food cart. GHPL collaborated with Grandview resident, library volunteer, and graphic designer, Mike Dexter to create the graphics.

The vehicle, which cost $50,000 after customization, was fully funded by the GHPL Foundation, which raises private funding from donors to support the library’s long-term financial security as well as current-use funding needs. Watch library staff open the PopUp Library. 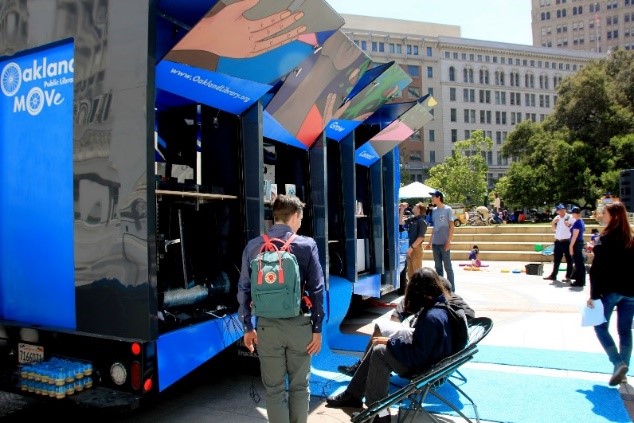 Another all-electric vehicle, Oakland Public Library’s Mobile Outreach Vehicle (MOVe) was developed with Oakland’s underserved youth in mind. The library wanted to reach areas of the city without public facilities like libraries and community centers. Sure, MOVe has books—but why stop there? The mobile library offers access to tablets, movies, music, video games, crafts, and more. It turns from mobile library to social gathering space with portable seating and sun umbrellas, and offers a place for Oakland residents to learn coding, charge their devices, watch a movie, and of course, relax with a good book.

The Oakland Public Library used $500,000 in funding from their local city council that was designated for expanding library services to disadvantaged youth. This Ford E-450 is 27 feet long and eight feet wide, and when the side panels are lifted, it expands to 31 feet long and 14.5 feet wide. A collaborative project to the core, the art on the panels were designed by students at an Oakland high school and an area non-profit called Dragon School, which nurtures young artists. The library even engaged a focus group of six students in East and West Oakland who offered feedback on the design of the vehicle and the services it would offer. 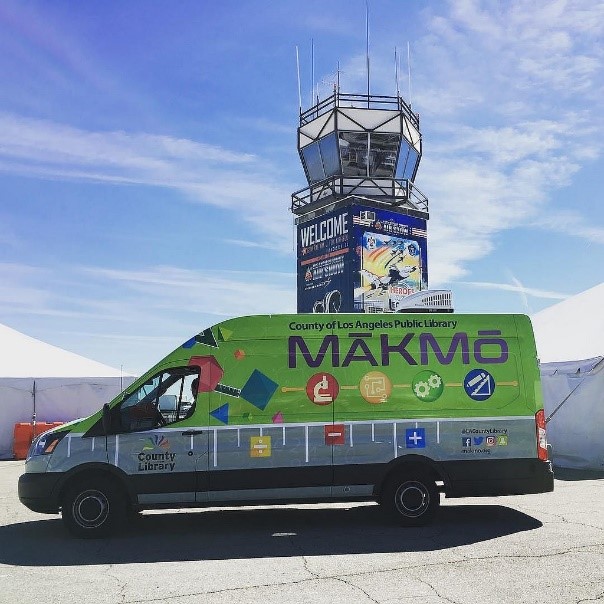 The LA County Library has four MākMō Makerspace vans designed to bring technology access to communities that might not have it, and to even lay the groundwork among community youth for an interest in STEM careers. The name, MākMō, is a shortened version of Maker Mobiles. These STEM makerspaces-on-wheels bring programming to 87 libraries and 3,000 square miles of territory. The vehicles transport high-tech equipment like 3D printers and scanners, tablets and laptops, LittleBits and Snap Circuits kits, and microscopes. It also includes low-tech but equally fun supplies like modeling clay, sewing machines, and K’Nex.

The MākMō vans are cool enough in their own right, but they’ve had an exciting side effect for the library system as well—expanding partnerships. The vans head out to places like schools where you might expect to find a mobile library, but you’ll also find them at a juvenile detention center, a health fair, or an air show. The budget for each MākMō van is about $250,000, which includes the van, equipment, and staffing.

Does your library have a unique take on the mobile library? Have you seen a bookmobile that makes you dreamy-eyed? Share your favorites in the comments!