How did you get started with Wikipedia? 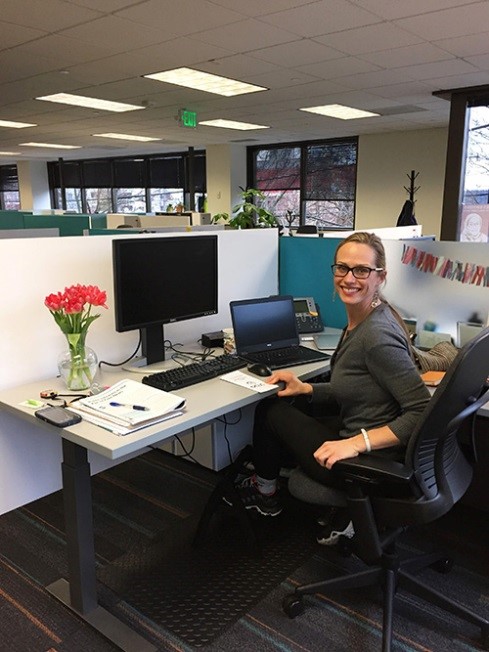 When I created my Wikipedia editing account in 2012, I was a big skeptic. I had read about the gender gap among volunteer editors on Wikipedia in the New York Times and I had concerns about its reliability.

But I came around! I was invited by scholars I admire to an “edit-a-thon,” an in-person Wikipedia editing meet-up with drinks and food. I soon figured out that not only could I use my skill set to understand the platform, but I could address the quality of information available online. And Wikipedia editing is asynchronous and distributed; I have not spent hours at a time researching and writing in-depth articles. My edits are subtle. I improve Wikipedia incrementally, by taking a few minutes to add a reference or change syntax.

Image on the right: Monika in the Seattle office.

What made you see Wikipedia as more credible?

Learning to “read” Wikipedia pages. Articles are in varying stages of completion. I could more reliably assess a page’s content when I understood this. One thing I love is that every change is saved, accessible, and revertible. This is marvelous in terms of version control! Wikipedia is a dynamic work-in-progress. And one small thing a new editor can do is flag a page as needing more references.

At first the complexities of Wikipedia’s interface overwhelmed me. But I have come to appreciate them. They reflect the efforts of thousands of Wikipedians around the world to scale the project, make it an open and verifiable referencing source and at the same time discourage vandalism.

There are millions of articles in nearly 300 languages. The fact that users have built out this social and technical system in an otherwise for-profit internet industry that often rewards “click bait” or “branded” content is impressive. On Wikipedia information is not sensationalized, it is verified.

What is your favorite Wikipedia contribution?

I am proud that I wrote Ashley’s Sack. Ashley’s sack is an embroidered cloth feed sack from the mid-19th century given to a nine-year old slave girl, Ashley, by her mother, Rose, when Ashley was sold away and separated from Rose.

The contents of the sack included a dress, a braid of Rose’s hair, pecans, and “my love always.” It was passed down to Ashley’s granddaughter, Ruth (Jones) Middleton, who embroidered their story on the sack in 1921. The artifact is now on display at the National Museum of African American History and Culture.

The Wikipedia article is well-referenced with reliable sources. But it also foregrounds the women in this story—Ashley, her mother Rose, her granddaughter Ruth. The endurance of their familial ties through the dehumanization and discontinuity that slavery inflicted upon them—goodness, that is so powerful. The focus of the article is on this story, their story.

This was important to me because the artifact got a lot of press, but many of the stories centered on the historian who traced the sack’s provenance. The Wikipedia entry—which is now the first link in Google’s search results—returns the story to Ashley, Rose, and Ruth.

What message do you want to share with public library staff?

I—like most people—am guilty of simply using a default search engine when I want to find something out. But the big search engines often point to websites where internet users can buy a book or product rather than to the vast collections of information that public libraries manage.

So how can more internet users learn about public libraries’ vast and rich collections? I believe Wikipedia can do more to point people to them. There are efforts amongst the existing community of Wikipedia editors to use more library referencing tools, such as the Wikipedia Library. Librarians can too weave resources from their collections into Wikipedia articles so that readers would know where to turn to get more information. Wikipedia can also be a tool for libraries to use in their community programs and patron instruction around information literacy.

The crossovers between public libraries and Wikipedians are many—both prioritize free and open access to knowledge for the public. Developing opportunities to maximize these crossovers will be the focus of the WebJunction online training program in the fall.

How will you be working with WebJunction on the Wikipedia + Libraries: Better Together project?

I’ll be working to design and deliver an online training program for a cohort of 500 public library staff. Participants will collaborate to gain confidence with Wikipedia in order to expand their reach, improve patron access, and ultimately raise the profiles of US public libraries. Program enrollment will happen over the summer. For those unable to participate, all the materials will be downloadable and freely accessible. For more information on the program, you can sign up to join our mailing list.

In the meantime, I’d love to hear from public librarians who are curious about this project or Wikipedia. Drop me a line or come by the office. I’m also available on Wikipedia at Monikasj.