3D Printers: a revolution headed for your library

3D printing conjures notions of the Star Trek replicator—a computerized machine that can turn a verbal command into 3-dimensional objects, including food items. The evolution of 3D printers is advancing rapidly toward and even beyond that sci-fi vision. This is transformative technology. And libraries are positioned to be a hub of the transformation.

We first published this story in November 2012, as 3D printers were becoming more affordable as libraries began to look more closely at how these devices might fit within library services. Three years later, we've revisited the topic with updates, new information, and resources on this still hot topic.

A revolution: industrial and cultural

3D printing, also called rapid prototyping or additive manufacturing, is manufacturing gone digital. A digital design file, created in two dimensions on the screen, can be rendered as a 3-dimensional real-world object. In a February 2015 article in Wired magazine, the movement is described as a "decentralized industrial revolution," and notes that in the business and manufacturing world, 3D printers are already reducing materials costs, saving time and leading to innovations in service delivery. Alongside computer-automated milling machines that have increased efficiency, 3D printers introduce the potential for short order prototyping of new designs, smaller runs of specialized products or parts, and customization to the taste or requirements of individual consumers.

Although 3D printing machines for industry have been around for almost 30 years, they are now bursting into the personal printer market. Prices once in the $100K range have dropped below $600 for home printer models. The ability to design and print an object is now in the hands of anyone. In fact, it’s not even necessary to be a designer; with free databases like MakerBot’s Thingiverse, a user can pick a ready-made design to print. The 3D Printshow London in 2012 was the first dedicated 3D printing event in the world. Attendee Christopher Barnatt, Associate Professor of Computing and Future Studies in Nottingham University Business School, observed, “This reminds me of walking around a PC show back in 1987; at that time personal computers had clearly not transformed the world but the foundation had been laid. It’s the same thing here today.” Now, three years later, there are shows in seven major cities and "exponential growth of this incredible industry." Many predict that 3D printers will be ubiquitous in 5-10 years, as common as desktop printers are today, triggering as big a cultural shift as the Internet has.

Maker culture in the library

It is one leap of understanding to grasp that the science fiction of the replicator is essentially a here-and-now reality; it’s another leap to understand how and why libraries need to be on the leading edge of this disruptive wave. Artist Thomas Gokey, who has taught an "Innovation in Public Libraries" class at the Fayetteville Free Library (NY), offers a compelling insight into this radical but tangible shift in this 10-minute video on Public Libraries, 3D Printing, FabLabs and Hackerspaces. “What we’re talking about here is the democratization of the means of production,” Gokey enthuses. Creating a space for 3D printing in the library “where people gather to share their knowledge and help each other” aligns naturally with the deep history of public libraries as engines of democracy and centers of discovery.

Earlier this year, ALA President Sari Feldman contributed to an NPR story on the evolving use of 3D printers in libraries. "It's actually part of a larger trend...where once we thought of libraries as places where we had things for people, now we really do things for people - or do things with people." In libraries hosting 3D devices, the emphasis is on the community of people sharing and making with each other, rather than on the technology, though the breakthroughs in new technologies elevate the making to an enticing and challenging level.

For those who fear the mess and the moil of an active space where people are making things and learning and sharing, just think of the children’s section in almost any typical public library. It doesn’t seem at all radical to watch youngsters and teens cutting, pasting, sculpting, computer-designing, video-making, and generally finding ways to incorporate making into their learning. Why not extend the making environment to adults in the library?

Here are a few examples of libraries demonstrating the possibilities:

How does 3D printing actually work? 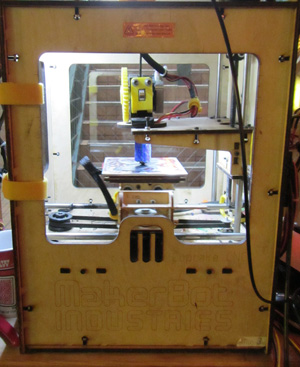 The basic definition is that 3D printing is an additive process, where an object is created by laying down successive layers of material. For a familiar frame of reference, the How Stuff Works explanation of “direct” 3D printing likens it to a 2D printer that uses inkjet technology: the nozzles “move back and forth dispensing a fluid” on a surface. Unlike 2D printing, the nozzles also move up and down to build up layers of material, and the nozzle is spewing plastic polymers or waxes rather than ink. The direct printing method is the common technique for the lower-priced personal printers.

It sounds straightforward enough but the subject can get quite technical in a hurry. The Wikipedia entry includes a table of 12 different technologies (and an acronym for each), explaining that the “main differences are in the way layers are built to create parts, and the materials that can be used.” Materials cover a wide spectrum from various plastics to metal or ceramic powders, liquid resin, metal wire, foil, plaster, food substances and more.

For this learning curve, videos convey the concept better than text. Here are a few that bring the concept to life:

An even greater leap into the sci-fi future involves bio-printing with human cells, “really just a modified inkjet printer,” says Gokey lightly. Seriously, the field of regenerative medicine is researching the potential for 3D printers that use living cells to “print” tissues and whole organs. In this eye-opening TED talk, surgeon Anthony Atala tells and shows how it works and how it may someday “solve the organ-donor problem.” Mark Ganter, a professor of mechanical engineering at the University of Washington, marvels, "It's astounding that you can print out a 3-D object and literally breathe life into it with cells that are essentially computer firmware."

Probably the best way to grasp the reality of how the personal level of 3D printing works is to find the makerspace nearest you and go try if for yourself. Adventure in 3D Printland is this author’s foray into the expanding universe of replication.

This only scratches the surface of the paradigm-shifting potential of 3D printers and makerspaces. For more information, check out these resources:

Enjoy exploring the ever-expanding universe of 3D printing and the possibilities for libraries and our communities.