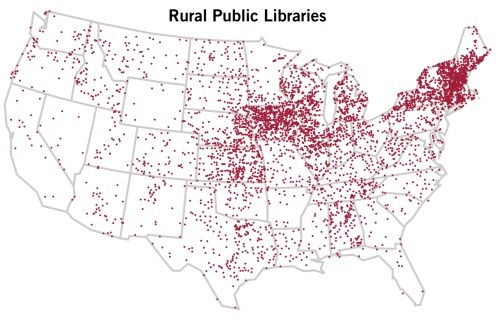 The Institute of Museum and Library Services has released a research brief providing the agency's first targeted analysis of trends for rural and small library services. The report gives an overview of the distribution, service use, fiscal health, and staffing of these important community assets. One of the report's surprising findings is the sheer number of public libraries that can be classified as either small or rural.

The report, The State of Small and Rural Libraries in the United States, provides much needed clarity on definitions of  'small' and 'rural' and will serve as an excellent resource for building awareness of the critical work of these libraries.

"This report is a must read for policymakers who are concerned about the health and vitality of rural America," said Susan H. Hildreth, Director of the Institute of Museum and Library Services. "Whether the issue is education, economic development, or access to broadband, small and rural libraries are important communications hubs for people in small towns and rural locations."

The brief's key findings include the following:


Additional information about the report is available in the IMLS press release.