Librarians Who Wikipedia: Course Participants Engage with Wikipedia for their Libraries

This article was originally published on November 30, 2017. Wikipedia + Libraries: Better Together is an OCLC project that is building bridges between public libraries and Wikipedia. The project included an online training program for US public library staff hosted by WebJunction in the fall of 2017. Librarians Who Wikipedia is a series of interviews with library staff who engage with Wikipedia; this article features stories from four course participants representing three libraries. 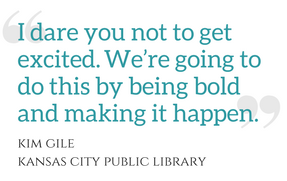 On September 13, 2017, nearly 300 library staff from 45 states and seven countries joined the Wikipedia + Libraries: Better Together online training program to learn more about the inner workings of Wikipedia. For their final assignment, course participants developed a plan of action to use Wikipedia in their libraries. Following the conclusion of the course in November 2017, hundreds of library staff will turn their attentions to implementing their Wikipedia engagement plans.

In the final live session on November 15, four course participants gave guest presentations highlighting their plans and accomplishments. We’ve brought together their stories here to share the course’s impact so far on libraries and their communities.

Jazz has deep roots in Kansas City, Missouri. But Kim Gile noticed that this aspect of her community’s history—and stories of notable musicians, artists and women—are underrepresented on Wikipedia.

In her guest presentation, Gile, community reference manager at the Kansas City Public Library, explained that the gaps present opportunities to engage fellow library staff and the African American community her library serves to raise the visibility of the city's rich musical cultural heritage.

The American Jazz Museum, which is in the library’s service area, is a natural partner in this effort. Museum staff are keen to collaborate and Gile is working with them on plans to host a Wikipedia editing event. She hopes to focus on contributing to biographies of African American artists and women using the extensive collections at the library and museum.

As a result of her course experience, Gile wants to help her fellow librarians see that Wikipedia is a resource worthy of engagement.

"We've been told not to use it, and never to tell patrons to use it," she explained. "I used to think the same thing, but I'm glad to say that my mind is completely changed. This is a tremendous opportunity here to make [Wikipedia] a very robust resource for everybody.”

"I dare you not to get excited,” said Gile. “We’re going to do this by being bold and making it happen.”

Denise Davis shared in the course discussion forum that the training program has been a catalyst for her and her colleagues to change their approach to teaching research skills. Following a course section on evaluating Wikipedia, she decided to revamp an upcoming research session. We invited Davis and her colleague Tom Boeche, librarians at the Morton-James Public Library, to explain what they did and share future plans with Wikipedia in their guest presentation.

Every year, students in Nebraska City, Nebraska, come into the library to prepare for National History Day, a nationwide historical writing competition. After getting the go-ahead from their teacher, Davis used the 8th graders’ list of research topics to find complementary Wikipedia articles. She reviewed example articles, illustrating the different article classes: featured, good, starter, and stubs. “We started with the Manhattan Project, which is a Featured Article. Students could see how it followed very well the typical structure of an encyclopedia article,” Davis explained. “And then, of course, we scrolled to the bottom for the incredible number of references and resources to mine for their future researching.”

Davis explained to the students how to understand a Wikipedia article, and where to go next. She said this process was helpful for them to understand how to be critical consumers of information. The students then met with Boeche for the next steps in the research process, a walkthrough of library catalogs and the stacks.

In the end, “the teacher was very pleased,” Davis said. So pleased that she asked the librarians to speak with the school about the value of the online encyclopedia—the platform is currently blocked for students.

“I, too, used to poo-poo Wikipedia,” Davis said. “Now I consider myself a convert. I am pushing its value to help students be critical consumers of information.”

Davis and Boeche are also looking forward to editing articles on the history and culture of their town of approximately 7,500 people situated along the Missouri River. They’d like to train their colleagues and partners to contribute to Wikipedia using their library collections. “We’re the original home of Arbor Day,” Davis pointed out, referring to the global tree planting initiative.

“Wikipedia can draw people into our libraries and museums, help our community explore the unique resources we have,” said Boeche.

Samantha Dodd, a Special Collections Archivist at the University of Texas at Arlington Libraries was our final presenter on November 15. Last August, her supervisor asked her to organize an edit-a-thon in October for International Open Access Week. Dodd had just enrolled in the course and had never edited Wikipedia. Rather than organizing an edit-a-thon, which would have been ambitious, she instead proposed two events to introduce Wikipedia and convene scholarly conversations about it for the library and the broader university community.

The first event, “A Walk through the Wikiverse,” featured a presentation by Michael Barera, a former Wikipedian-in-Residence with 11 years of editing experience. His insights on a reference people thought they understood as readers, “blew everyone away,” Dodd said. The second event was a panel conversation with presenters from multiple disciplines discussing the benefits and drawbacks of using Wikipedia in the classroom.

The events drew large crowds of university and community attendees, with many mentions on Twitter. In the days that followed, Dodd found her library at the center of additional Wikipedia initiatives, including plans for a presentation at the state library association meeting. She’s also been contacted by three faculty members in the Women’s and Gender Studies program for support in incorporating Wikipedia assignments into their classrooms.

Building on this momentum, Dodd is working with a partner from Women’s and Gender Studies to host a HERstory edit-a-thon on Texas women’s history on March 28, 2018, in conjunction with other Women’s History Month activities at the university. The organizing team is at work on the list of 150 articles about Texas women to edit. “The majority … have starter or stub articles, they’re at a perfect point for beginners to expand,” Dodd explained.

She told her course peers that building from conversations is paying off. “Think beyond the edit-a-thon. What we are developing [is] an ongoing Wikipedia project here—with the library as the center of it all.”

Interested in learning about Wikipedia for your library? The OCLC Wikipedia + Libraries project is hosting the webinar, Citations Needed: Build Your Wikipedia Skills While Building the World’s Encyclopedia, on January 10, 2018. The webinar will take place on the eve of the global #1lib1ref campaign (which stands for “One Librarian, One Reference”). This initiative invites all library staff to add one reference to Wikipedia from January 15 through February 3, 2018, to improve the online encyclopedia. Participating in #1lib1ref is a great introduction to engaging with Wikipedia. Register for the webinar here.