Anna Souannavong, Assistant Director of the Gates Public Library in Rochester, New York, perceived a need for discussion and education in her local community on opioid addiction and the widespread crisis happening across the region and throughout the nation. Her research lead to the discovery of widespread frustration of navigating both prevention and recovery services, but ultimately the misinformation of data and more particularly a misunderstanding of substance use disorder and its impact on our communities, neighbors, friends, and families.

Using her position as a librarian who specializes in programming, she responded to a sense of urgency to orchestrate a community forum that would present an opportunity for connection and a better informed public. Souannavong’s thought processes for devising this program was to begin with a series of three panels comprised of select industries who are directly challenged by this crisis. To optimize the program’s influence, coordination and hosting responsibilities fell under the auspices of partnered colleagues from local public libraries in her county whose library system functions as a consortium. This collaborative effort among library colleagues brought together a panel of medical experts (representing both physiology and psychology), law enforcement officials, and advocates in the addiction community. To maximize attendance, panels took place in three different niche locations over the course of the summer.

The program was a success, with over 200 people in attendance and nearly 300 views on the Facebook live stream. During a recent interview, Souannavong described the program attendees as, “…a mix of people from the community at large, including community residents, church congregants, and those from advocacy organizations; all displaying a passion for this community rallying effort. It was beautiful and empowering to see the community come together like this.” 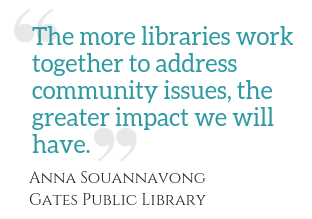 Souannavong shares, “My favorite aspect from all of this is that it presented public libraries in the eyes of community stakeholders and individuals as an impactful resource that educates the public. This program positioned the library in a way that our community is able to experience the value in organizational collaboration and how the library can assist in identifying communal needs and the mutual benefits to building those partnerships. That was my greatest achievement.” The Gates Public Library and Souannavong specifically have been contacted by libraries across the U.S., and recognized for their work by local and state legislators.

For those looking to implement similar programs, Souannavong recommends making sure the panel or program offers an enticement for people to participate. “I wanted to make sure we had a draw to make people want to attend our panel. We made a specific effort to identify a person to moderate the panel who would attract members of the community to the program.” In addition, having support from the town supervisor and organizations represented on the panel is key. “I was fortunate enough to have support from our town supervisor. I recognize other towns may not have that same response.”

Addressing the opioid crisis did not just stop at these library forums. Souannavong accredits Dave Attridge, Executive Director of RecoveryNow NY, for the local grassroots program, Gates to Recovery. Attridge was present at each of the panels and took the opportunity to offer a way to help by sharing his field experience with Town Supervisor, Mark Assini and the Town Chief of Police, Jim Vanbrederod. As a result, the Gates to Recovery program was formed, which is a drop-in referral center located at the Gates Town Hall for those seeking help with drug addiction. Gates to Recovery has now expanded their services to four different locations across the county. The right people were in the room thanks to the purposeful recruitment of panelists and participants by Souannavong. “I was wondering if these groups were talking to each other. Are they collaborating? Are there any gaps in services? What needs did these groups have to make their jobs more effective? I wanted to get everyone together in one room to discuss all of these things and identify what needed to change.” 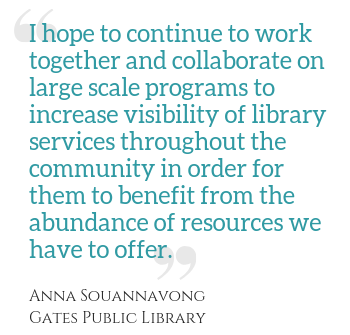 Moreover, the Monroe County Library System is an association of independent public libraries working together to improve library services for residents of the county. These panels allowed them to pilot a new collaboration model to overcome programming challenges that separate their work. For example, each member library is governed by an independent board of trustees and funded by local taxes. Anna says,”…in the public eye we are one library system. I hope to continue to work together and collaborate on large scale programs to increase visibility of library services throughout the community in order for them to benefit from the abundance of resources we have to offer.”

Since hosting the opioid panels, other libraries in the county like Webster Public Library and Henrietta Public Library held similar forums addressing the opioid crisis in their communities. Furthermore, Gates Public Library recently held an autism panel which Souannavong shared, and several member libraries in the county including Lincoln Branch Library, Seymour Library, Hamlin Library, and Henrietta Library are working to host the panel at their library. Reflecting on future work at Gates Public Library, Souannavong shared her desires. “The more libraries work together to address community issues, the greater impact we will have.”

Library Assistant Director Anna Souannavong currently serves on the Steering Committee for the project, Public Libraries Respond to the Opioid Crisis with their Communities. More information about the project and activities is available through WebJunction.