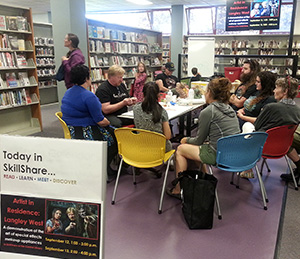 Early in 2014, two Washington libraries launched newly transformed areas in the middle of their floor space, replacing static (mostly CD) shelving with dynamic spaces for active community engagement. Working with WebJunction under a grant from the Allen Family Foundation, the central Bellingham Public Library (BPL) and the Everson Branch of Whatcom County Library System (WCLS) each conceived and redesigned existing space in response to input from their stakeholders.

The transformations were both physical and energetic. Where previously patrons would just grab an item or two, checkout and leave, the fresh layout, furnishings and targeted resources of these spaces now invite people to investigate, participate and create content to enrich the community. Clearing and reimagining a modest amount of space opened up new possibilities for inviting community members in to engage with the library and with each other.

A bit of background

In seeking to build capacity for community engagement in public libraries, the Transforming Library Spaces project explored evolutions in physical space and services that facilitate libraries as hubs where community members find shared ground to explore, collaborate and create content. The grant enabled the two pilot libraries to test the practical application of the concepts.

BPL in 2016: SkillShare is abuzz and a-building

SkillShare has come a long way in the intervening 21 months. A glance at the BPL event calendar reveals that SkillShare is abuzz with programs, with something happening nearly every day of the month. The calendar is filled with a combination of programs offered by community members and those offered by library staff, including tai chi, financial literacy, making felt pictures, tech coaching and the ever-popular knit night. 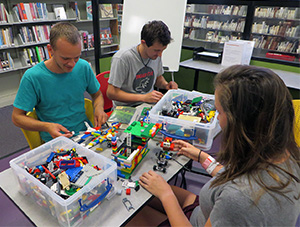 According to Public Services Clerk Jenni Johnson, who coordinates SkillShare, "Some of our most popular offerings have been artist in residence programs and Music in the Library, since these provide opportunities for patrons to watch or listen for as long as they'd like without disrupting a class." Skillshare users are diverse―children, families, the elderly, homeless and people from all walks of life.

To activate the SkillShare space between the facilitator-led events, Johnson developed several programs that do not require staffing. For BrainBuilders; PaperCraft Party; Coloring for Grownups; and Think It, Build It with Lego Bricks, the materials are set out on the tables; patrons can drop by and use them anytime during the "program." BPL Friends of the Library funded the purchase of the materials.

Johnson is also experimenting with using the digital sign (large monitor) to show films―documentaries, music or holiday classics like The Nutcracker ballet. Recently when there was a documentary film showing, a little girl asked her mother why people were watching TV. Johnson overheard the mother reply, "they're learning," which seemed like the perfect response.

"SkillShare has provided a great opportunity for us to connect people with other people and with other ways of learning," Johnson says with pride.

There have been some challenges in getting community members to volunteer as presenters. They have discovered that attracting volunteers to share their skills takes a lot of one-on-one outreach; it is challenging to dedicate the staff time required while juggling many other priorities. And although users have embraced the reality of an open, visible, fluid space, many presenters may have a difficult time with the concept of how to deliver a program in such a public space, where people sometimes drop by for only a few minutes rather than stick around for the entire time.

"The patron response to SkillShare so far has been overwhelmingly positive," says Johnson. "So many of our patrons have expressed gratitude for the new space and the activities available to them there." The momentum continues as the Bellingham Public Library discovers more ways to build new programs, engage volunteers and connect with more audiences. 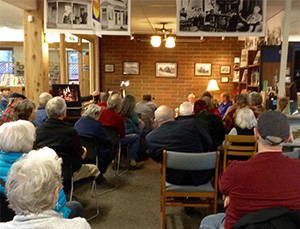 At the small Everson branch library, the warm and inviting space of the Nooksack Valley Heritage Center (NVHC) continues to fulfill its purpose of actively engaging community members around local history. Volunteers use the equipment to help patrons digitize documents, cassettes and VHS tapes, and to record their stories. Volunteers are available to help with genealogical research on Ancestry.com, a database made available throughout the WCLS branches. Another volunteer oversees and updates the display cabinet, refreshing the historical artifacts every quarter.

The community's embrace of the dedicated library space is roundly evident in the volunteer-driven NVHC committee of local history enthusiasts. They conceived NookChats, a monthly program hosted by local historian, Jim Berg, and featuring special guests who talk about Nooksack Valley heritage. The "chats" attract 30 or more people per session. The center's rocking chairs, a DVD of a crackling fire and refreshments all contribute to the relaxed, homey atmosphere. 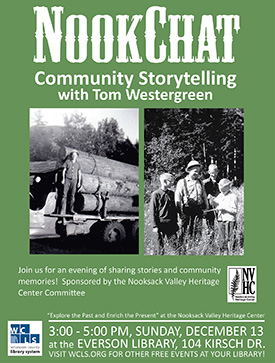 Audience comments and questions are encouraged. "People connect and reconnect at these heartwarming gatherings," says director Eileen Shaw. "We hear many expressions of enthusiastic gratitude."

The Chats are videotaped and made available on YouTube, thus augmenting the Nooksack Valley historic record by creating and preserving oral interviews. (Note that some of the sessions have been edited; most are the original "as-it-happened" versions.) The edited sessions are also shown on local TV.

At any time, the cozy space occupied by the Center invites laptop users and informal or formal meetings of various sorts. Shaw concludes, "It really is an attractive focal point for our library."

If you are interested in expanding your library from collections to creation, WebJunction has several resources available.

Explore the topic Space Planning, which contains links to articles and webinars including the archived, free webinar Transforming Library Space for Community Engagement, and the accompanying 46-page guide.

Imagination and creative energy abound at the Think It, Build It with Lego activity. Photo by Bellingham Public Library

Forty-six people fill the Nooksack Valley Heritage Center for a NookChat; notice the crackling "fire" on the left. Photo by Everson Public Library