Recognize and Target the Appropriate Audience

From Awareness to Funding: A Study of library support in America, the research that informed development of the Geek the Library campaign, found a distinct audience with potential for increasing library support for this campaign. They are labeled Probable Supporters. This group of people represents about a third of the U.S. population. They support the library to some degree, but their support is not a given.

Probable supporters don’t fall into any specific demographic group and may not be frequent visitors to the library, so in order to reach them we recommend a multipronged marketing approach. Additionally, traditional print advertising (such as newspaper) is recommended as Probable Supporters fit the profile for newspaper readership demographics.

The Library Supporter Segmentation Pyramid below contains 10 segments. Each distinct combination of the six constructs defines a segment. The pyramid includes the percentages of survey respondents that fall into each segment. Survey responses were weighted to be nationally representative, therefore these percentages represent residents ages 18 to 69 in U.S. communities of less than 200,000. 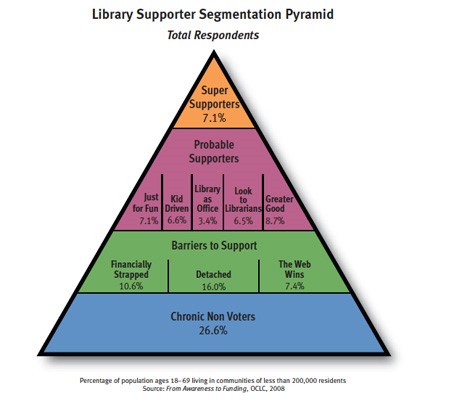 It’s difficult to effectively segment your local population accurately, but it is important to think about where people may fit into the segments as you plan advertising tactics and events, and communicate with specific organizations, community groups, etc. However, to make sure the campaign reaches the target audience, we recommend diverse touch-points, and not focusing all promotional and advertising efforts in one area.

For more detailed information about Probable Supporters and Super Supporters, please review From Awareness to Funding: A study of library support in America.

It’s also important to focus on community leaders (influential members of the community) as a specific target audience. This group can directly and indirectly help you promote Geek the Library and maximize the educational value of the campaign. These prominent members of the community are well-respected individuals who are part of the local leadership and often speak out about important issues. Remember, all campaign communication and use of campaign materials should remain politically neutral and consistent.

Examples of community leaders are:

Local groups, such as the Kiwanis and the chamber of commerce, provide an avenue for reaching influential members of the community. Consider giving a short presentation to introduce the campaign.