Steps 1 and 2 of Building Digital Communities

Increasing information technology access and use in order to build cohesive 21st century communities is a complex task. Building Digital Communities: Framework for Action provides guiding principles and steps for getting started. Thanks to support from IMLS, Dodge City, Kansas has been convening stakeholders (step 1) and creating a shared understanding of digital inclusion (step 2). They will soon be creating a plan (step 3). Steps 4 and 5 are "implement the plan" and "evaluate and revise the plan".

Prior to convening stakeholders, Dodge City needed a local leadership team and needed to define who the stakeholders were.

Knowing representatives from multiple sectors were needed to create local leadership teams, OCLC reached out to Cathy Reeves, Director of the Dodge City Public Library and asked her to identify someone from city government and someone from a nonprofit to serve with her. Cathy chose Jane Longmeyer, Director of Public Information at City of Dodge City and Greta Clark, Professor and Director of Multicultural Education at Dodge City Community College. All three have large personal networks, are enthusiastic about increasing information technology access and use in Dodge City and have the support of their supervisors.

Cathy, Jane & Greta agreed that convening stakeholders was a good idea but struggled with how to define stakeholders. They considered crafting a survey but were unsure what distribution method would result in a wide variety of community members participating. OCLC reached out to the Center for Digital Inclusion at the University of Illinois, Urbana-Champaign and WayMark Systems for stakeholder engagement expertise. OCLC, the Center for Digital Inclusion and WayMark Systems (we call the three of them "national support") provided the local leadership team with a digital inclusion stakeholder worksheet and provided guidance identifying potential stakeholders.

Stakeholders were invited to four initial meetings held on April 24 and 25. Each meeting consisted of the same discussion questions and completion of an online stakeholder alignment survey. We held four meetings in order to accommodate schedules, resulting in 66 stakeholders attending the meetings. The meetings were all held at the Dodge City Public Library.

The online survey was also distributed to stakeholders who could not attend the meetings.

A full summit of stakeholders was held May 17. The summit was held at the Civic Center. We intentionally chose a different location than the initial meetings in order to reduce the possibility of the initiative being viewed as a library project. 55 stakeholders attended the summit.

For the in-person gatherings and the online survey, the local leadership team personally reached out to stakeholders to encourage their participation.

The discussion questions of the April 24-25 meetings were:

At the May 17 summit we reviewed the survey results and shared visions of success, resulting in formation of working groups. 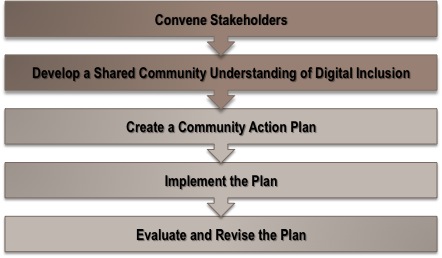 "They did not just tell us what to do, but worked with us as a team to make the stakeholder engagement process a learning process for us and an opportunity for the community to discuss digital inclusion and begin creating a plan that we as a community can actually make happen."