IFLA in Helsinki Welcomes a First-timer

[Zola Maddison, WebJunction Project Coordinator, was recently selected as an Associate for the 2-year IFLA International Leaders Programme. She shares her first impressions of the 2012 IFLA Conference in Helsinki, Finland.]

Ingrid Parent, President of the International Federation of Library Associations (IFLA), said in her opening ceremony remarks, "The Olympics may be ending, but the real international event is just beginning here in Helsinki." This is my first time attending an IFLA conference, and I’m completely new to IFLA. With this perspective, I wanted to share my first impressions of the conference so that you can learn alongside me, and perhaps feel inspired to attend an IFLA conference in the future. 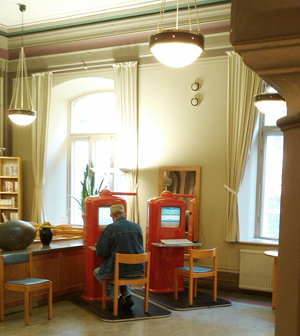 The evening before the Opening Ceremony, I attended the Caucus for United States attendees. This event was a great way to get grounded in a foreign environment. There are almost 400 U.S. library professionals attending this year’s conference, so there are many familiar and friendly faces among the 4000 IFLA conference attendees. The U.S. currently has three representatives on IFLA’s governing board, and they provided an overview of changes within IFLA, key initiatives, and perspectives for having a successful conference. Highlights of IFLA’s initiatives included their newly established International Leadership Programme, the new impact report on the Building Strong Library Associations effort, and their continued work toward creating strong policy papers on E-Lending. In addition we were welcomed by the chair of the IFLA 2012 World Library & Information Conference (WLIC) National Committee from Finland, Maija Berndtson and Tay Ai Cheng, chair the IFLA 2013 WLIC National Committee to be held in Singapore, August 17-23, 2013.

[Photo: "Fuel up on information"--old petrol pumps converted to computer kiosks at the Helsinki City Library; by inky on Flickr.]

The Opening Ceremony was an inspiring way to kick off the conference, with traditional folk songs of welcome and of bringing hope and faith in times of adversity. Maija Berndtson gave a welcoming address that focused on a common value of library staff everywhere—generosity. She shared information about Finnish libraries; we learned that the Ministry of Culture is responsible for public libraries in Finland and works toward making public libraries the "living room for its citizens". The guiding principles are openness and availability and libraries are seen as the avenue to provide equality, education, and culture. Helsinki’s Mayor, Jussi Pajunen, echoed this sentiment as he spoke about their new main branch library and his commitment to the library and, through it, building a stronger community. "A successful city has to be a city of culture," stated Pajunen.

This is truly a welcoming conference—from Tay Ai Cheng enticing us to attend next year’s IFLA conference in Singapore with promises of amazing food and air conditioning (she even distributed Singaporese curries at their booth!) to the over 300 Finnish library staff volunteers helping us navigate Helsinki and the conference. There is a spirit of generosity and collaboration in the air. Mark your calendars—I hope to see some of you in Singapore.