How a New Mexico town was able to turn a mysterious crash in the late 1940s into a promotional opportunity for the whole community would be a remarkable story in itself.   But the fact that it was the town's library that was instrumental in this transformation is good cause to make the Aztec Library WebJunction's Library of the Month.

The town of Aztec is in the high desert in New Mexico's northwest corner.    Like a lot of small towns, Aztec had been struggling to compete with larger neighbors for scarce dollars.  But local resources comes in all shapes and sizes, and in the case of Aztec, one important asset has turned out to be saucer-shaped. 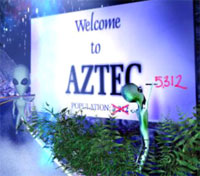 According to Frank Scully's best-selling 1950 book Behind the Flying Saucers, an unidentified disk-shaped vessel crashed near the town on March 25, 1948, and a secret government investigation recovered the bodies of sixteen humanoids on board.  When Leanne Hathcock became Director of the Aztec Library nine years ago, she immediately saw an opportunity to put the town on the map.  Whatever you think of UFOs (we'll leave it to the Wikipedia community to sort that one out), Leanne recognized that this was a distinctive piece of the town's history that the community--and the library--could use to their benefit.  She worked tirelessly with her own board and other groups in town to establish a "UFO symposium:" a weekend of speakers, presentations, and a tour to the purported crash site 12 miles outside of town. 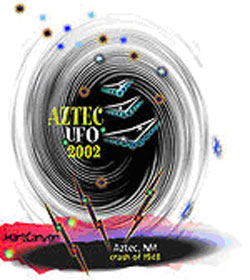 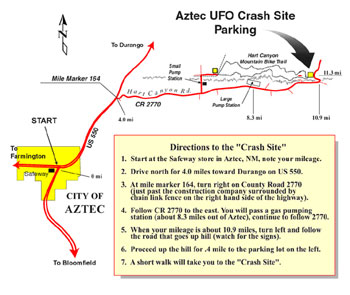 Leanne encountered resistance at first ("the town thought it was a little hokey"), and she ended up commissioning a town-wide survey to measure support, which turned out to be much deeper than a few noisy skeptics made it appear.   Leanne would say to the doubters, "If you can come up with something better, please tell me and I’m right there with it."  No-one did, so the symposium was born.

And the results have far exceeded anyone's expectations.   Perhaps because of the library's involvement, the Aztec UFO symposium is considered more high-toned and scholarly than similar events in other locations: speakers often agree to come because the event supports the library.  Now in its ninth year, the symposium has attracted international attention and helped fund a two-million-dollar, 9,400 square foot multi-use library building, which opened in September 2005. 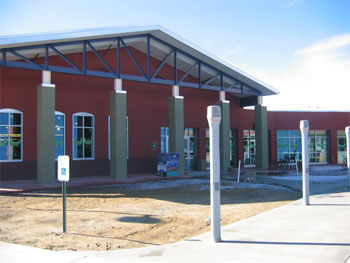 The new Aztec Library, a tribute to local creativity and a little help from beyond the stars.
Photo courtesy Aztec Library

Building on the success of the symposium, the library has been instrumental in sponsoring additional events, including a Space Art contest (with an online art category that collects entries from as far away as Israel and Sri Lanka) and the "Alien Run Mountain Bike Competition" on the Hart Canyon Trail, near the crash site.   As you might expect, with success the complaints have tapered off, and the town now has a "UFO art" store (recently incorporated into the library itself.) 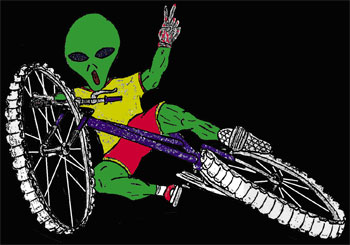 Given how important the library has been in making the town more visible, it was only natural that, when a group of town leaders sat down a couple of years ago to explore the future of Aztec, Leanne and her library had a place at the table.  The initial impetus for the meeting was to consider how to make use of Aztec's historic courthouse (Aztec is the county seat of San Juan County).  They considered the area's resources: the bright stars of the New Mexico sky, the many ancient ruins nearby (including Mesa Verde and Chaco Canyon), the tradition of modern aerospace research conducted in the state, and of course, the incident at Hart Canyon in 1948.  The result was a proposal for a "Four Corners Center for Universe Studies" to be based in the Aztec Courthouse.

The scope of the project is ambitious: to bring together a wide range of federal, state, and local partners to make the Aztec Courthouse a cultural and educational center for the study of archaeoastronomy (the astronomical practices and sky-myths of ancient peoples) and ethnoastronomy (the use of traditional understandings of astronomy by contemporary native peoples).  One of the project's main partners is the University of New Mexico's Lodestar Astronomy Center, which will work with the town to create a new planetarium that recreates the experience of ancient Native American astronomers as they observed the brilliant stars and planets in the clear desert sky each night.

The project has a strongly educational thrust and the library is envisioned as the central element for delivery of information and technology to visitors.  Providing both local citizens and visitors with access to technology , within the context of the "Universe Studies" project and beyond, is a key component of the project plan. "Technology pods" (pun intended?) at the library will serve as launching pads for visitors' explorations of the mysteries of the ancient world and outer space.  The "t-pods" will also be used by kids to create animations that can then be projected digitally onto the planetarium dome.  The library's integration into the project has been helped along by Leanne's persistence in adopting new technology, from Gates computers to wi-fi and beyond, ensuring that the library has the capacity to support the town's new vision.

It's not always easy to be an agent of change: "Sometimes I'm really bucking the wind, believe me!" says Leanne.  But she firmly believes that to get peoples' attention "you really need to be out on the edge."  And both the town of Aztec and its library have benefited from her creative vision.

This work is licensed under a Creative Commons Attribution-NonCommercial-NoDerivs 2.5 License.