Case Study: Everyone Connected, Everyone Informed in Minneapolis 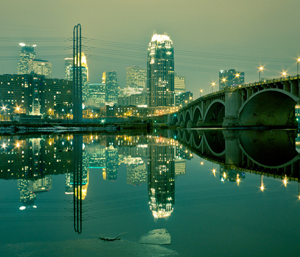 The City of Minneapolis should be proud of its blue lakes and bright skies…and of its leadership on digital inclusion. As trailblazers in tackling the digital divide in Minneapolis, city officials and their partners are creating models for other communities to follow.

The city-wide attention to digital inclusion has been a sustained and multi-faceted effort, solidly rooted in this vision:

“All City residents, institutions and businesses will have the tools, skills and motivation to gain value from the digital society.  Our residents and businesses need to be equipped to effectively compete with others around the world—to be smarter, more creative, more knowledgeable, and more innovative. Leveraging technology is a necessary ingredient of success.”

The 2006 Wireless Minneapolis Digital Inclusion Task Force report summed it up succinctly: “Everyone connected, everyone informed.” Subsequent activities have been guided by this.

Working with local vendor US Internet in a public-private partnership, Minneapolis has largely succeeded in covering nearly 100% of the city with an outdoor wireless network, overcoming the odds that have defeated many municipal broadband projects. With extensive community input, the City and US Internet negotiated a Community Benefits Agreement in 2006, which committed the city as an anchor tenant and committed the vendor to take steps to increase access to underserved users.

In 2011, Otto Doll joined the City as Chief Information Officer and with support from city leaders at the highest levels, centralized strategy and coordination for the city’s digital inclusion efforts in the Information Technology department.  Otto Doll and Elise Ebhardt are leading the activities and have hosted quarterly meetings with key community players to solicit experiences, ideas and recommendations. They also convened informal meet-ups with a variety of community stakeholders, guided by the simple notion of calling together the people you know who are interested in digital inclusion, and knowing that each will arrive with a unique perspective on the same issue. The outcome is an environment in which opportunities for connecting and creating solidarity are ripe.  A key component for communication and stakeholder involvement has been Elise’s connections with the Technology Literacy Collaborative, a local forum promoting digital inclusion in the Twin Cities metro area and beyond, and frequent conversations with Mary Ann Van Cura from the State Library Agency.

The IMLS Framework for Building Digital Communities proved to be a useful tool for orienting stakeholders to the concepts, sorting through the complexities and setting priorities for digital inclusion. Elise devised a worksheet based on the IMLS Framework structure to help participants see how existing strengths and resources addressed a range of digital inclusion principles, as well as revealing the gaps/needs and opportunities for collaboration. In addition, the City of Minneapolis came up with its own Close the Digital Divide framework based on their vision.

The three priority principles are:

To better understand the community’s use of and access to computers and the Internet, the City of Minneapolis developed the 2012 Community Technology Survey and sent it to a random representative sampling of city residents.  The survey questions asked about technology access, Internet use, comfort levels, and demographic information. The results from 2,578 completed surveys are summarized in a handsome City-wide Digital Inclusion Profile. “The study analyzed the resident view of the digital society; profiled their digital tools; defined their level of digital literacy; showed their information consumption patterns; and showed their engagement via the Internet.” Elise Ebhardt created an interactive map from the results, which allows residents to compare responses to specific questions across 32 neighborhood “clusters.”

To a large extent, funding for digital inclusion efforts has come from the City of Minneapolis budget, including allocations of staff time. Addressing the digital divide in Minneapolis is included in the city’s IT vision and strategic plan.

As part of the municipal wifi development, the Community Benefits Agreement with the local telecomm USI Wireless (USIW) designated a Minneapolis Foundation Digital Inclusion Fund to promote equitable access to technology for the community. Initial contributions by USIW have been supplemented over the last four years by a percentage of USIW's revenue from wireless subscriptions. The recent Community Technology Survey was funded in part from this source. There is an annual Fund grant cycle that awards grants to community agencies.

Since the early 2000s, the City of Minneapolis has involved stakeholders and partners across the community. The list of participants in the 2006 Wireless Minneapolis Digital Inclusion Task Force report is indicative of the variety of individuals and organizations included in the planning and deliberations:  students and educators from Minneapolis K–12 schools, representatives from the University of Minnesota and MNSCU systems,

Minneapolis Public Libraries, The Greater Twin Cities United Way, ADC, IBM, and Best Buy Foundations, Central Labor Union, community development agency representatives, public housing residents and staff, and representatives from minority, disability and senior communities. The strong partnership between the City of Minneapolis and the USI Wireless to deliver on Wireless Minneapolis has had significant impact on the community’s ability to increase digital inclusion in the city.

The vision statement articulated in 2006 serves as the lodestar to align digital inclusion efforts and to define the message. Digital inclusion has been high on the radar in Minneapolis for quite awhile now, as evidenced by these communication channels:

As a follow-up to the survey, the City sought to convene interested community members to discuss ways to bridge the gaps exposed by the survey results. City leaders and staff hosted meetings in four locations distributed around the city. All were invited to attend—residents, business, public and private sectors—anyone with an interest in the topic.

Who showed up? A mix of new people as well as familiar players: interested residents, neighborhood associations, public and state library staff, educators, business representatives, telecomm company reps, Wells Fargo, nonprofits, and employment agencies.  Although the highest attendance at a meeting was 17 people, discussions were lively. As Mary Ann Van Cura, from the State of Minnesota Library Services, remarked, “how often do people turn out to talk about data?” Forum attendees voiced their ideas about the survey results and ways to address digital inclusion. Most came away with an increased awareness that no single organization can tackle the needs on its own; bridging the digital divide is a community-wide task. As Elise puts it, “There is an inherent requirement for collaboration because it crosses so many parts of life.”

Towards achieving its digital inclusion vision, the IT department intends to:

To address some of the access disparities surfaced in the survey, the City recently launched a pilot “Digital Equity” program, pulling together a variety of community resources and partners.  Ten eligible families have been selected to receive free computers, one year of free Internet access, and computer training. The increased access is integrated with employment resources, financial skills-building and use of technology with the goal to improve quality of life for the families. In evaluating success a year from now, the program will look at increases in basic technology skills, employability, and financial literacy. Perhaps the most critical question will be “Are you able to maintain Internet service at home after the 12 months of USIW service?”