The Social Justice and Libraries Open Conference was held May 14, 2016, at the Northwest School in Seattle, WA and was a free unconference-style event for library workers and students focused on dismantling structural oppression. In my first post, I discussed how this event came about. Now that the event is complete, it is time for reflection.

Building an event from the ground up—especially an event without any funding—requires creativity, flexibility and a level of precision teamwork usually reserved for the limbs of one body performing an extended drum solo. We were extremely fortunate to have our space, our web development, refreshments, and the time and wisdom of our speakers donated without remuneration of any kind. We also received guidance from CritLib Seattle, a local offshoot of the larger critical librarianship community.

From a planner's perspective, the day was a dizzying success. Ninety people from 31 institutions (including public, university, school and community college libraries) attended. Participants, most of whom were library employees or MLIS students, engaged in conversations around participant-generated topics such as tools for allyship; outreach and community activism; inclusive teaching and critical pedagogy; and whiteness, privilege and colonialism in libraries.

As an organizer, I was not able to participate in any session fully, but my observations were of honest and lively discussion. Participants reported feeling that the event was a safe and inclusive space for these often-difficult conversations, which led to real feelings of solidarity and new connections being made.

Our biggest success was in bringing together people from various library communities who don't typically have a space to share their social justice trials, successes and failures. Often, in fact, people from the same institution aren’t aware of what their colleagues are doing or experiencing.

We did receive feedback that more facilitation would have improved the discussions. The half-day structure of the event meant that participants were only able to attend two sessions. While the rest of the day was filled with speakers and information tables from local organizations such as Social Justice Fund Northwest and Books to Prisoners, many reported that they would have benefited from more time spent in structured conversation. 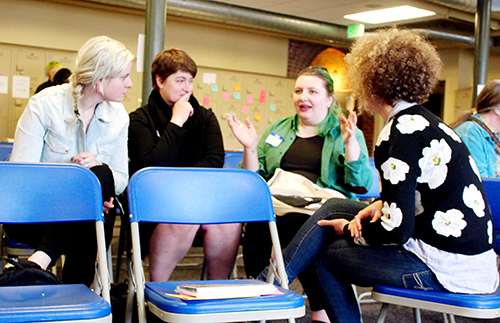 The most satisfied participants were those who came with the goal of forming connections with like-minded people. These connections are extremely valuable and we hope will translate into action as participants return to their institutions knowing that they are not alone in these struggles. Isolation is the perfect place for complacency because you are accountable to no one, inspired by no one. Activism requires activists. Community building was the primary goal of the conference, and it was extremely gratifying to see this happen. There were also moments of surprise. An MLIS student was surprised that discussions of social justice in librarianship were not more mainstream or more frequent; a public librarian expressed surprise that others so often experience the same issues she does.

Sometimes the surprise is in the amount of work required to make real changes. Our opening speaker, artist and activist C. Davida Ingram, talked about experiencing resistance from organizations to the types of social justice work she had been hired to enact. The expectation, then, is that critical librarianship is theory, and social justice is talk. We hope that the discussions and collaborations formed at the Social Justice and Libraries conference will help participants actively work against normative racist, sexist and homophobic structures already in place. To do this, we must build on the discussions we have had and reach out through the connections we have formed.

We hope that this event will take place again next year. With a website, mailing list and strong social media presence, a solid foundation has been built. The test of this foundation, however, is in how these conversations translate into the work we do. Discussion, engagement and reflection are important first steps. Justice cannot be achieved without action, however.

There are many next steps for us as well. We will be exploring grants to fund next year's conference, as well as seeking new community partners. I also hope to do a lot of listening. Similar to how writing changes the way we read, planning and organizing a conference will change the way I attend events in the future. There is also room for improvement and expansion, especially in remote access for those not able to attend in person. The area in which we have the most room to improve is in recognizing who was present for these discussions and whose voices remained left out. Our attendance largely mirrored the homogeneity of the LIS field (mostly white, mostly women).

My advice to others interested in hosting a similar event is to act with transparency and intention. I personally have been grappling with issues of inclusivity and how (or if) three white organizers can make a space for conversations that fall outside of the white normative structures of our organizations. Calls for diversity are meaningless, both in the larger LIS field in and at events such as this, if they are not changed from places where some people are comfortable and others are not. I remain unconvinced that white organizers can create such a space on their own. To remedy this, we must be prepared to listen, to take note and to move away from our comfort to create space where others are comfortable as well.

I would like to end by expressing my deep gratitude for everyone who joined us for the first Social Justice and Libraries Conference. Knowing that so many people were willing to spend a Saturday being present, and often being uncomfortable, is a true show of commitment to social justice.

Photo: Participants engage in conversation at the Social Justice and Libraries event. Photo by Marisa Petrich.