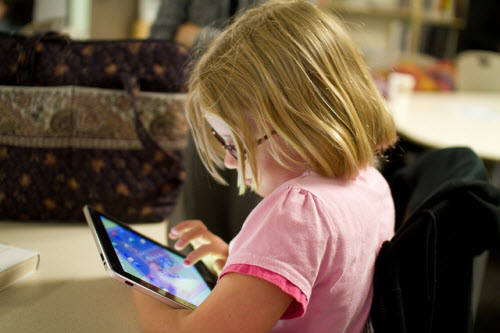 For some time now there has been a growing concern about digital learning for children. Is it good for young learners to engage with reading and literacy development through eBooks on digital devices? What might children be losing when they learn to read by swiping digital screens on different sized devices instead of turning pages of printed books? Long the bastions of literacy, many libraries are feeling compelled to offer digital devices and eBooks for young readers.

An example of an e-library for children's books includes the California-based MagicBlox. MagicBlox recently offered a $38 lifetime access fee as a promotional offer after its website reached 1 million page hits. A 2013 survey by Digital Book World found that while children up to age 13 often get books from the public library, older teens increasingly prefer Amazon over the public library. 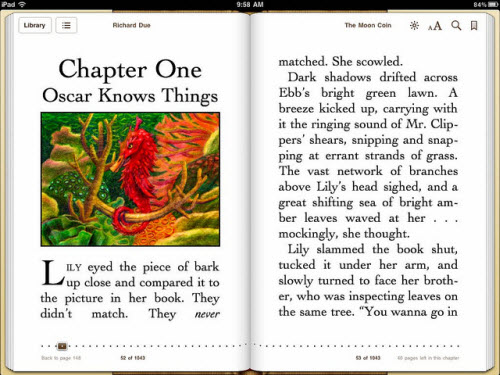 Though there are certainly benefits, there is also a serious concern about the effect of eBook consumption on the cognitive skills of children. The 2013 survey cited above also found that while many parents prefer eBooks for their children, there are even more who want to stick with printed books. Bonnie Rochman in her Time.com article talks about how technophile parents who regularly download digital content for themselves do not use digital content to read to their very young children. She makes an interesting comparison, stating that just as ketchup is not a vegetable, viewing extravagant 3D images of the Mad Hatter on an iPad is not reading.

Similarly, in an April 2014 article in Education Week, Benjamin Herold reports how researchers in Philadelphia found that a child's level of reading comprehension is higher when they read printed books compared to iPads and Kindles. The researchers suggest that digital devices are viewed as sources of entertainment because of their "game-y" content, and that this often distracts children from the reading they originally set out to do. The researchers do not criticize iPads as a device but emphasize that educators and policy-makers should understand that the practices of reading and comprehending differ based on the medium. 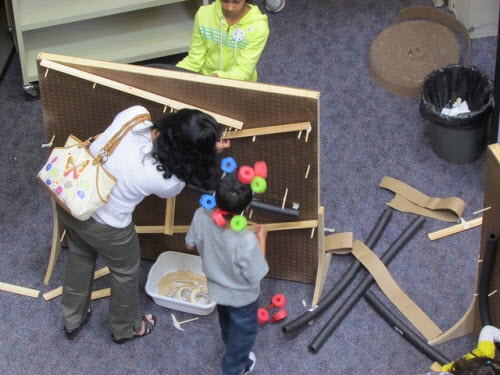 Given the scenario in which children are becoming more oriented in navigating touch screens and watching 3D audio-visual content rather than reading printed words and imagining scenes and characters, it is quite heart-warming to realize that libraries are trying to encourage children to get hands-on experience by touching and playing with objects to learn new skills. Makerspaces, in sharp contrast to the experience of swiping static screens lit up by animated images, invite children of different age groups to lay hands on wood, plastic, metal objects to build things to fire their imagination. From being passive consumers of information, makerspaces, when introduced to young children, will invite them to become active creators and builders. For more information about how to create a makerspace in your library, visit our webinar, "Making Your Space: Creators and Makers in the Library."

Much as children have always built with blocks, constructed papier mache, used paints and crayons and their imaginations to construct brilliant scenes and characters, makerspaces are stepping up to be the 21st century venue for these creative processes. The tactile component of makerspaces seems to put today's children in touch with what an earlier generation did with colors, printed books, paper, and plasticine. There is hope, at least, that new generations of library users will enjoy the tactile experiences we can provide just as much as the pixelated ones.