Libraries in Myanmar are Taking Strides in the Right Direction 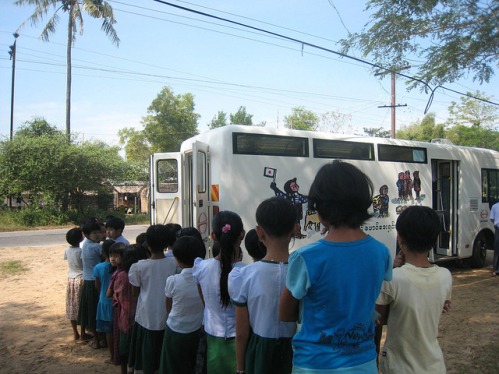 In a recent interview with Alma Freeman, editor of In Asia, the head of the Myanmar Book Aid and Preservation Foundation, Dr. U Thant Thaw Kaung, talked at length about the challenges and achievements of libraries across Myanmar. Dr. Kaung also leads the mobile library project under the Daw Khin Kyi Foundation in Myanmar. In his current capacity as The Asia Foundation’s Chang-lin Tien Visiting Scholar in San Francisco, Dr. Kaung described the high rate of literacy and rich reading culture in Myanmar and the concrete steps the government has taken in recent times to address the needs of the country.

Although literacy rates are high, access to good quality books continues to be a serious problem. Dr. Kaung says the mobile library project conducted by the Daw Khin Kyi Foundation, named after Nobel Laureate Daw Aung San Suu Kyi’s late mother, revealed the people’s eagerness to read and borrow books. The project has been successful because now libraries reach the doorsteps of people and they don’t have to travel long distances to access books. With 8,000 members and over 90,000 check-outs, the mobile library service recognizes that more affordability of and access to books will make Myanmar read more.

The Asia Foundation’s recent survey of Myanmar’s public libraries reveals that while libraries struggle to maintain their infrastructure with an average budget of $2 per library per month and with very limited access to new publications, 97% of responders appreciate the value and impact of libraries in their communities. There are over 5000 active libraries, many of which are in rural areas, and they want to increase their potential in providing access to their patrons.

More than 70% of Myanmar’s population lives in rural years and are farmers by profession. But, Dr. Kaung points out, if access to healthcare and new advances in farming are not accessible, farmers will soon migrate to urban centers and the rural areas will remain underdeveloped. So, his work focuses on developing rural libraries by training public librarians in modern librarianship as well as equipping rural libraries with books and computers. While English-language books are in high demand in the big cities, rural libraries need to be stocked with local-language books. So, Dr. Kaung has made arrangements with his donors such that 30% of English book donations are sold to raise funds to buy local-language books. Through ‘book buffets’ in urban centers where books are sold at low prices, Dr. Kaung’s team raises funds for serving rural libraries.

Ultimately, bringing education to rural populations who seek it eagerly drives Dr. Kaung and his team to negotiate with partners such as Beyond Access and Ooredoo to provide computers and internet facilities in public libraries in rural areas. While the government has started relaxing censorship laws and has to work on issues such as electricity, Dr. Kaung perseveres in his mission to expand literacy, education, and overall community development in rural Myanmar.