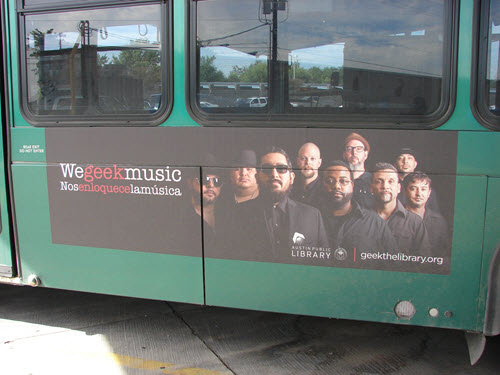 So you're visiting Austin, Texas, sitting outside enjoying some local barbecue, and a bus passes by featuring three things: a stunning photo of Grammy nominated local band Grupo Fantasma, the Austin Public Library logo and the message: "Nosenloquecelamusica" or "Wegeekmusic". It gets you wondering, and you ask yourself, "How is that band connected to the library?"

The Geek the Library campaign is designed to cause that reaction, and now the Austin Public Library is challenging the residents of Austin, Texas, to play "Spot the Geek" as part of its Geek the Library campaign. As Austinites notice Geek the Library billboards and bus wraps around town, they're urged to take a photo and post it to their favorite social media outlet using #geekhunt and #igeekATX. The ads feature notable Austinites sharing their passions to raise awareness about what the Austin Public Library does for the community.

Geek the Library is a community public awareness campaign aimed at spreading the word about the vital and growing role of the public library, and to raise awareness about the critical funding issues many U.S. public libraries face. The campaign is designed to inspire a conversation about public libraries and the urgent need for increased support. 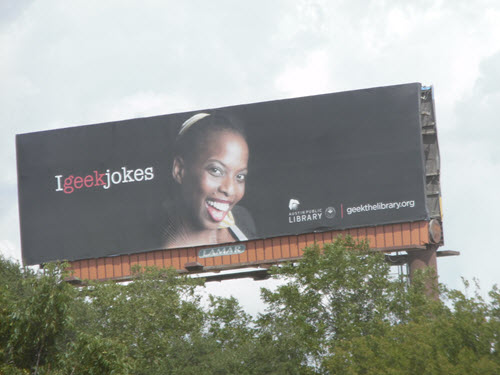 The concept for Geek the Library includes making the community the face of the local campaign, and they're doing just that in Austin. Featuring local celebrities gives the campaign its own local unique look and feel, which helps community members make the connection between the campaign, the value of the library and the importance of support.

Austin Public Library public information specialist Kanya Lyons created the "Spot the Geek" promotion to generate engagement and create awareness about the library, and the many services the library provides to Austin residents.

As people see Geek the Library campaign elements around the community their curiosity increases and the campaign provides an effective platform to educate and engage people about the critical value of the library to the community, and feeds a growing awareness that every individual, inevitably, plays a role. 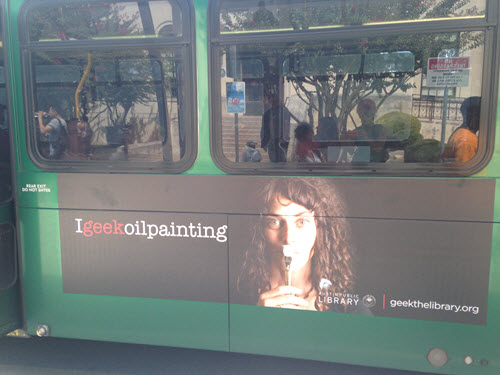 One of the bus wraps seen around Austin features local painter Jennifer Balkan holding a paint brush in front of her lips. Balkan texted her photo to Lyons the first time she saw it riding the bus around town, and Lyons tweeted it out to the community. Those who agree to feature their faces on behalf of the library's campaign are invited to be inventive and show their personalities, hence the brush placement in the photo. "I thought I might take one of the photos with the paint brush in front of my mouth because painting is the way I use my voice."

Geek the Library is sponsored by OCLC, a nonprofit library cooperative, with funding by a grant from the Bill & Melinda Gates Foundation. Enrollment in the campaign closed in June, 2014, and support of enrolled libraries continues through June, 2015. More than 1,800 library locations in 48 states have been involved in a Geek the Library campaign. The Geek the Library program wrapped up in 2015, but related materials and information are now available on WebJunction's Geek the Library page.