Core Library Value: Tools for telling it over and over

“We don’t need to invent a new advocacy program every year; we just need to repeat the core messages over and over and over.” ---Jamie LaRue, Director, Douglas County Libraries (CO) 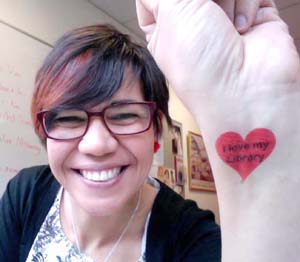 With all of the library advocacy tools and efforts in play, one might hope to never again read an op-ed piece like this misinformed, unsubstantiated “advice” from a recent Harvard grad for a makeover of  Seattle’s libraries. If the author bothered to step foot inside a library, if he was tuned in to the many years of Library 2.0 conversations, or if he researched circulation statistics or door counts, young George might have a clue about the value and 21st century currency of his community libraries. But those are very big “ifs.” Clearly, he has not gotten the message in spite of the number of library directors, trustees and staff who have participated in advocacy training and used advocacy resources.

The work of communicating the value of libraries is ceaseless—not in the Sisyphean sense of futility but definitely in the sense of unending effort. There is a maxim popular with trainers that you have to repeat something at least 7 times before it sticks with the learner. In the case of conveying the essentiality of the library to its community, that number may be more like 7 to the nth power.

The good news for everyone is that the library community has created a number of excellent tools for advocacy. Some of the more prominent ones are detailed here. Although the tools are numerous, the recorded evidence of the impact of using these tools is scanty.

This article describes six tools or programs for library advocacy:

This is not an exhaustive list by any means. There are many state, regional, and community-based advocacy toolkits and programs, in addition to the organizations whose work sustains libraries in many ways.

See also Library Videos from the Bill & Melinda Gates Foundation that showcase work done in libraries which are transforming lives, by changing the way we connect.

“Turning the Page 2.0 is a free library advocacy training course developed and presented by the Public Library Association (PLA) with generous support from The Bill & Melinda Gates Foundation. In this six-week, facilitated online course, library staff and supporters learn how to create and tell their library's story, deliver effective presentations, develop a compelling case for support, and build and sustain partnerships along the way.”

The six-week course used a blended and fully facilitated learning approach, beginning with an optional in-person kick-off (often at a library conference), and followed by weekly live online sessions, independent work on online modules, cohort discussions, and one-on-one email consultation with the professional facilitators. A well-designed Advocacy Work Plan, the “cornerstone” of the program, enables participants to define an advocacy goal for their library and build a plan one section at a time guided by the course topics.

In the words of Stephanie Gerding, professional facilitator for Turning the Page, “Sometimes advocacy sounds so BIG to libraries, like one more thing that is huge that they have to do, but really it is just little steps that they need to take to make a big difference. Sharing a cup of coffee with a community group leader can help to build a partnership for example.”

The initial Turning the Page offering ran from 2007-2010 in conjunction with the Opportunity Online hardware grants program funded by the Bill & Melinda Gates Foundation. The success of the original version induced the offshoot Turning the Page 2.0, which expanded the training opportunity to the wider library community.

According to an internal report, all but 4% of previous participants indicated that the Turning the Page 2.0 training made them feel very or somewhat prepared to implement advocacy efforts. The program evaluations will look at longer term outcomes in a 6-month follow up survey of those who completed the course. Watch for a summary report to come out later this year.

Anecdotally, the testimonials tend toward glowing:

And the handful of success stories confirm the testimonials:

“Everyone ‘geeks’ something—and the public library supports it all.”

“The Geek the Library project is a community public awareness campaign aimed at spreading the word about the vital and growing role of your public library, and to raise awareness about the critical funding issues many U.S. public libraries face.” The findings of the OCLC research report From Awareness to Funding: A study of library support in America were a catalyst for developing the campaign. “OCLC developed a theory that a community-centered public awareness campaign—one that uses strategies similar to those of many successful brands and focuses on funding awareness, not usage—could be implemented on a broad scale and make an impact locally.” The bold, attention-grabbing branding and simple message aim to raise the visibility of the library and create personal connections with the community.

Funded by a grant from the Bill & Melinda Gates Foundation, the pilot campaign ran from 2009-2010 mainly in two regional areas—southern Georgia and central Iowa. The grant was extended in 2011 to be made available to all public libraries in the U. S., growing the list to over 500 library locations in 38 states. The Get Geek site provides information about how the program works, why it makes a difference, and what you need to know about getting your library involved. The campaign provides unique opportunities for public libraries to engage the community in new and unexpected ways; partner with community organizations, schools and local businesses; and help library staff become better and more active library advocates.

The 2011 report Geek the Library: A Community Awareness Campaign tells the story of the Geek campaign in more detail.

“The Geek the Library community awareness campaign has been proven to raise awareness about the need for library support, change attitudes and perceptions about the library and the need for increased library funding, and drive behavior that relates to increasing support for the local library.” The 2011 report on the pilot campaign supports the success with quantitative and qualitative evidence. The “Geek the Library Delivers” section of the report describes the methodology of evaluation and gives data on the impact measures of raising awareness, changing perceptions, and driving intended behavior. A more recent library participant survey also found improvements in library staff advocacy- and marketing-related competencies.

Key results of the pilot campaign:

Note: The Geek the Library campaign has now ended. Based on the campaign, we've created Advocacy in Action resources to help you showcase the vital role of the library in your community and educate the public about the critical funding issues libraries face.

ALA (American Library Association) is practically synonymous with advocacy. The comprehensive list of resources in the Advocacy & Legislation section proclaims an abiding focus on helping libraries demonstrate their value and impact. The following are just a small sampling of the treasure chest of ALA resources.

With so many tools available and with such easy anonymous access, impact data and evaluations are difficult to track.

I Love Libraries has success written between the lines:

Further research is under way to uncover more evidence of impact.

BHAG (Big Hairy Audacious Goal) launched in 2010 as a proactive response to three ballot initiatives aimed at slashing public services across the state. The BHAG program was designed for non-library speakers to promote the value of libraries and decry the devastating impact of the anti-tax measures. Jamie LaRue, Director of Douglas County Libraries, describes the birth of the movement with a problem statement and outline of the process.

LaRue believes that library advocacy is not a rational appeal but an emotional one; you need to emphasize the transforming experience of the library. The campaign condensed its communication to four key points:

BHAG developed materials to help community members speak convincingly about their libraries, and created a website for easy access to them. Resources include a “one-dollar-to-five” script, which cleverly conveys the return-on-investment message; a presentation postcard for spreading the message; and postcards proclaiming the four key points.

Although the formal BHAG effort is completed, the work of demonstrating the impact of libraries is never done. This BHAG 3.0 post suggests how to keep the momentum going, including downloading the colorful Library Advocacy Trading Cards.

The most dramatic and direct outcome of the original BHAG effort is the failure of the 2010 ballot measures: Amendments 60 and 61, and Proposition 101 failed by wide margins, sometimes three to one. The final report confirms that 21 libraries reported a total of 99 talks, reaching at least 2,847 people.

There were also impacts beyond the numbers: “At the 2010 public library director’s retreat, it was clear that the idea of all public libraries carrying the same message, and recruiting people to speak for us, had caught on, and most directors thought it should continue. That might be a sea change.”

In the end, it is the stories that really “tell the story” of transformation. Here is one from the BHAG collection of stories:

“Cody read his first book while staying at my youth detention center. Like most of our residents, he'd missed enough school over the years that reading was neither fun nor easy. By the time he left, Cody was finishing whole books in a week, a feat we were both proud of. Like too many of my kids, Cody came back a few weeks later. The first thing he did was come tell me he'd visited his public library 'on the outs' and to share all the books he'd read.”

The Edge initiative is an effort to develop public access technology benchmarks for public libraries in order to help libraries evaluate and continually improve their public technology services for their communities. The benchmarks serve as “reference points” for a library or library system of any size to gauge its performance and determine what steps to take to advance their technology services. The project is currently piloting the benchmarks with selected libraries.

Library advocacy is one of four focal points of the benchmarks: “Sustainability by building a national network of leaders that share knowledge, information and experience to advocate for the impact of public access technology.” Ariel Gilbert-Knight elaborates on the relationship in her cogent TechSoup blog post Better Together: benchmarks and advocacy. The potential benefits of the benchmarks include creating a common language, setting standards, supporting planning/budgeting, advancing library credibility, and enhancing the ability to tell an effective library story.

The Edge initiative is still in the pilot phase. The iterative process of developing the benchmarks has garnered significant feedback from the library community. Read past news and updates and stay tuned for future reports.

The Impact Survey conducted a 2009 large-scale investigation of the ways U.S. library patrons use computers and the Internet at public libraries. The resulting 2010 report Opportunity for All: How the American Public Benefits from Internet Access at U.S. Libraries revealed invaluable evidence of the extent of library use and value. The IMPACT team offers two ongoing resources for using the study to advocate for libraries:

The training videos in the Advocacy Toolbox (scroll down) are real-life situations that testify to the efficacy of using IMPACT study data to support communication with funders and policy makers, particularly within a municipal or county government.