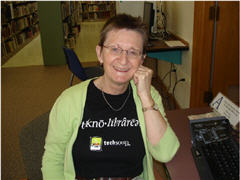 For Renee Goss, Director of the Richland County Library in Sidney, Montana, bringing the Internet to her rural community wasn't easy. Despite limited funds and few resources, Goss' creativity, willingness to learn, and business savvy persevered, allowing her to bring the advantages of the information age to her small county of fewer than ten thousand residents.

Goss came to the Richland County Library 19 years ago with a background in teaching. Her experience of setting up a computer lab for a small school was put to good use when the library received a grant to purchase its first computer, an experience which established her as a technology leader in her community. Renee chuckled, "I knew more [about computers] than somebody else [in town], so that was my claim to expertise, and I kind of really loved it."

In that first computer, Goss was able to envision a future for her library and her county. "From there, I could start to see what computers could do," she remembered. The library slowly acquired additional computers through grants and through Sidney's local "computer guy," who hooked up Goss with both inexpensive equipment and free help.

It was through this connection that Goss was able to set her sights on bringing the Internet to her small town, seeing it not only as important to the library but to the community at large. "For companies or anybody to locate here, you've got to make it so that you can still get big-town things even in a small town," she said. "And that was our theme: we knew the Internet was going to be one way to make us not so far from the big towns."

To Know It Is to Want It

Through Goss' efforts ten years ago, the Internet DID come to Sidney, and people were able to enjoy the benefits due to the library becoming the ISP in town. Later, Goss sought to expand her network even further, and once again profited from the power of local support that generated steam for the project.

"What we started doing was getting everybody to know about it, and so once you can get everybody wanting it - you know, like these 200 or more plus people that we had on free dialup - they start wanting more and more," she said.

Goss now turned to the local rural electric cooperative for support. Yet instead of funding her efforts, they shared a different idea. "They notified me the next day that I had really convinced them, so I'm thinking, 'I'm going to get money,'" she shared. "What they did was decide to become an ISP, so they bought equipment and became the area's Internet service provider."

Although freed from the daily responsibilities of managing and operating an ISP, Goss continued to remain invested in her library - and her town's - technology future. Goss first learned about wireless WANS from an article in Library Journal. Inspired, she worked with the local high school to create a wireless network between the library and high school. It was not long before Goss set her sights on connecting the rest of the area, through a grant called "RiCoNEt" (Richland County Network). Goss says she was in the process of locating a hopper atop Sidney's water tower when the local ISP announced plans to bring digital cable to Richland County. 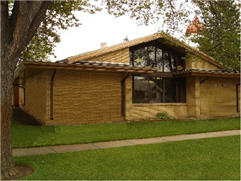 "Finally we were able to get - and everybody was able to get - a lot more portable Internet access," Goss said. Ever the opportunist, Goss struck up a deal with the ISP where the ISP would send potential customers over to the library to check out the library's Mega Speed Internet, and in turn, Goss received free service and more exposure for the library.

Goss attributes much of her success to persistence and networking, working creatively with local organizations and businesses to find resources and funding. For example, Goss said she received a lot of free help from the local computer store in exchange for letting the store train its employees on library computers; Goss has also been working with local electronic stores to offer discounts on mp3 players for library-card holders.

"I think it's in collaboration that you learn about your community, they learn about you, and you figure out how you can pair up with somebody," she said. "Collaborative efforts are key to whatever it is you're doing. Work with as many groups as you can."

In this spirit, Goss has also partnered with other local organizations to purchase books for the library, honing in on specific groups to help fund various collections. For instance, the local Lions Club raised funds for books to travel in tubs to daycare programs; the local Health Department and hospital to help fund and maintain a large portion of the library's health collection; the Veterans Association helps fund books on war; and even the local hunters' associations pay for books on gaming and fishing. Finding funding for books frees up money for technology projects at the library, yet this has not prevented Goss from looking for ways to pay for technology as well. In addition to writing grants, creating matching-funds programs, and even holding telethons, Goss constantly looks for ways to promote her projects and the library as a vital resource in her community.

Looking back to the days when she was a new librarian set on establishing her library's first Internet connection, Goss marvels at her determination. "I guess I didn't think about failure at the time," she said. "I just knew whatever we could get- grants - would be for the better, and I did have a lot of support. I sought out experts-I called lots of people in libraries to find out how they did things."

"Thinking back, it's nice, because you can almost see those steps. At the time, you're thinking you're not getting anywhere. So it's nice, I can kind of see, we really have moved forward a lot."