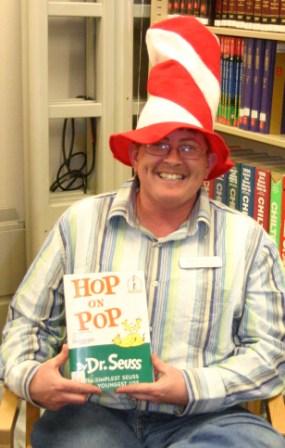 As the Office and Cataloging Services Librarian of the John C. Fremont Public Library District in Florence, Colorado, Kieran Hixon is always willing to embrace great new technology for his small, rural library.

A New Building
The facility serves approximately 5,000 people with six staff. Over two years ago, the library moved to a new building from a place Kieran describes as an “old Carnegie that was very dank, smelly, and small.” The facility has five public computers, and although they are all the same make and model, they are not set up identically. One computer is not connected to the reservation system and a second runs off Ubuntu, a community developed, Linux-based operating system.

Open to Open Source
Prior to automation, patrons signed a card in the library instead of carrying traditional library cards. The library became automated a little over two years ago. Kieran explains that when staff became a bit confused with the traditional library automation software that had been purchased, they began looking into the possibility of an Open Source Integrated Library System (ILS) for their circulation and catalog software. They adopted Koha, a full-featured, open-source ILS initially developed in New Zealand (ironically, the word Koha also refers to a Mori custom of gift giving). Interest in open source software grew, and staff started researching open source PC reservation software to replace a previous system that included a clipboard and an egg timer.

Kieran says they began to look more and more at the world of Open Source, and “realized that there were a lot more choices. We wanted to see how it went and just kind of experiment. It seemed like another set of choices and we’re kind of big on that.” Using PERL in HTML, they customized Koha a bit to suit their needs and individual tastes. For time and print management, staff also uses another Open Source software called Powerline, and they use Mozilla’s Firefox as a Web browser.

Kieran compares open source software to having a big sandbox to play in, but cautions that “not every librarian should immediately take all of their computers and change them – you don’t have to do everything at [one] time.” He suggests experimenting with and testing various software programs on one computer. For example, he discovered Koha by tinkering with various software on “a donated old dinosaur of a computer” using Linux.

Kieran also suggests referring to a website called Open Source Windows, which offers a list of the best free and open-source software for Windows. He finds the site easily navigable and the software effortless to download, and says that even if one ran into problems, an Open Source community with numerous bulletin boards is available to find information and ask questions.

Serving the Needs of the Community
Kieran explains that the surrounding community is far from wealthy, and that 70 percent of the students in the elementary school are eligible for free and reduced-price lunch. As such, he shares that the library “works with the community to make it something that they want to have.” They have won two recent ballot initiatives that raise taxes for the library and Kieran shares that the “community is really supportive and behind us, and it’s really working well.”

The county is also quite rural – so rural in fact that Kieran has no telephone wires near his home. He says that although the school, city administration, and library have high-speed Internet, “most everything around town is dial-up” although high speed Internet is slowly making its way around the county.

Help from a Boy Genius
The library benefits tremendously from the help of Jesse Weaver, a teen nicknamed Genius Boy who works eight to ten hours a week on IT projects. He wrote the code for the library’s Powerline reservation system using Python, and trades Kieran programming lessons for guitar lessons. Kieran says his programming lessons from Jesse consist primarily of SQL, Python and some HTML so “I can run whatever reports I want and just kind of start getting the idea of how to work with everything when [Jesse] leaves for college.”

Kieran says that he must sometimes provide “translation” when Jesse explains IT-related issues to non-technical staff. He shares, “The staff will come up with a question, and [Jesse] won’t get it. I’ll translate what they say to him and then he comes up with the answer. Everyone stares at him, and then I translate the answer.” For example, Jesse has received blank looks from the staff when he refers to the router. Kieran steps in and creates analogies that everyone will understand: “The door. All the patron computers go through the big door out into the world.”

Jesse has also instituted other systems to help troubleshoot problems, limit phone calls, and limit panic. For example, he created a computer troubleshooting notebook that staff can refer to in the event of problems, and that includes “a map of which computer goes to each router that is hanging around which wall.” Kieran describes it as a “very visual picture, which helped the visual learners.”

Working Together
Kieran explains that the library collaborates with other libraries in the county to host a summer reading program. They also partner with the city’s chamber of commerce for various events, and work with the schools to offer computer training classes for the public.

When looking to collaborate, Kieran suggests simply asking people for their help. He offers an example of when he instituted gaming at the library. He asked the community to donate materials, and says he received “more Xboxes than you can shake a stick at, because the community does want to be asked and does want to help. They often just don’t know how and I find that just calling the school and [saying], ‘Hey we want to try this and we need a space. What do you think?’ gets us a lot farther than if we think we’re the only problem solvers. If we think we have to do it all, we get overwhelmed and stop. But there are so many people that all you got to do is put it out there sometimes.”

Game On
Kieran shares that he had read blogs about gaming in larger libraries and wanted to bring gaming to his library. He shares, “I have video games at home. I play. I like it. How can I share that?” He explains that their town does not have a DVD rental store, and that families must travel quite a distance to rent movies or games, which can be quite a burden for some families.

So Kieran donated several of his own video games to the library and asked other gamers he knows to donate their old games. For a while, the games became the highest circulating collection in the library. He says that staff management of the area is minimal, so minimal that when the library received donated a video game system, he just “dropped the bag of donated stuff in the middle of the teen area and walked away and the kids had it set up and playing it within minutes.” The area has a sign that reminds teen patrons that the space is theirs, but that they must be respectful and reasonably quiet. He adds, “The kids maintain it themselves and they regulate themselves.”

Given the interest, Kieran organized a gaming tournament, with Dance Dance Revolution projected onto a large screen in one corner and a driving game on a television in the opposite corner. Kieran expected a dozen or so attendees, and was pleasantly surprised when he opened the door to find as many as fifty teens standing in line.

In order to play in the tournament, teens had to have a library card and not owe any fines. Kieran shared that teens who had never previously set foot in the library participated and have since returned to check out video games, and other teens “suddenly find” materials they had previously been unable to locate. Approximately 60 teens showed up for a recent video game tournament.

Various Means of Communication
Kieran explains that library staff use a variety of means to communicate with various populations. They have a wiki that they use for a variety of purposes such as making acquisitions, posting library policies, and communicating by IM. They write a blog and maintain a MySpace page, which, Kieran sats, “reaches kids where they are.” Kieran and other staff write a weekly column for the local weekly paper, which reaches “the over-sixty crowd.”

New Adventures
Kieran is lucky to have an adaptable staff. When they implemented the new ILS, they did not do formal staff training. He shares, “Luckily our staff training is just absolutely superior in all ways and [staff] kind of roll with it.” He admits that although a small staff with differing schedules makes it tricky, he would like to do more staff training in the future using alternative methods such as web conferencing.

Kieran is always willing to tackle new adventures. He sees the library as “an innovator in the community,” adding, “We’re willing to leap. Some of them may or may not fly, but we’re jumping. We push the envelope in trying things. Some [projects] don’t succeed, but if you try ten things and four things succeed, you have four successes.”

With such a positive attitude and can-do spirit, it looks like the library will indeed fly.